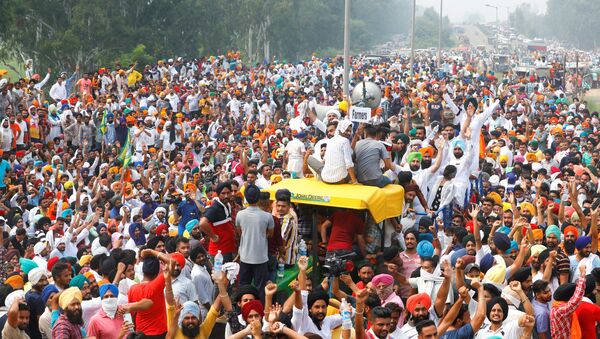 © REUTERS / ADNAN ABIDI
Subscribe
Advitya Bahl
All materialsWrite to the author
Farmers in the Indian state of Punjab began a three-day demonstration by disrupting train services to protest farm bills recently passed by both houses of the parliament. The protests have also led one of the five railway divisions under the Northern zone of Indian Railways to suspend operations of 28 special trains.

Several farmer organisations across the country are observing a nationwide shutdown on Friday to intensify their protest against the contentious farm bills passed by parliament earlier this week.

The protest comes as Indian President Ram Nath Kovind has yet to approve the Bills, or proposed legislation that would ratify them.

Various groups of protesting farmers' organisations in several states, including the agricultural states of Haryana and Punjab, have gathered at railway tracks and roads. They have obstructed the movement of traffic and requested traders to keep their shops shuttered.

Following the announcement of a nationwide shutdown, police across several states have been put on high alert.

Farmers of Mansa district have blocked the railway tracks. They are raising slogans against the BJP Govt's farm bills.

As many as 31 farmers' organisations have joined hands for the 'Bharat Bandh' (Nationwide Shutdown).

Farmers’ body Bhartiya Kisan Union (BKU) president Gurnam Singh Chaduni told the media: “There is a warm response to our stir in Haryana, Punjab and many other states… There should be a complete chakka jam (road blockade) on Friday. People’s support is a must for the same. There should be no vehicles on roads during the shutdown call.”

He has also asked the farmers to refrain from any type of violence.

In view of the widespread protest of farmers, Prime Minister Modi on Friday reiterated that the new legislation, that is aimed at farm reforms, is intended to improve the "welfare of farmers".

Urging the agricultural workers and of the federally ruling Bharatiya Janata Party to explain the benefits of the farm bills to the public, Modi also took a dig at the Congress Party, which had been opposing the bills.

Addressing a function on Friday, Modi said, "Previous governments used to make a complicated web of promises and laws which farmers or labourers could never understand. But the BJP-led NDA government has constantly tried to change this situation and has introduced reforms for the welfare of farmers."

Two farm Bills, namely The Farmers Produce Trade and Commerce Bill, 2020 and the Farmers Agreement on Price Assurance and Farm Services Bill, 2020 were approved by the Indian parliament earlier this week amid staunch protests by opposition parties.

The Bills seek to reform the marketing of agricultural commodities, allowing private parties to source products from farmers.

The main opposition party Congress Party and other opposition parties are against the Bill, claiming that the government wants to eventually end the practice of state procurement through government-guaranteed rates. These rates are announced in the form of a minimum support price (MSP) at the end of harvest season.

Several political parties, including Congress, which is the ruling party in Punjab state, have said they support the nationwide strike.

In a fresh attack at the central government over the contentious farm bills, Congress leader Rahul Gandhi on Friday tweeted: "A flawed GST destroyed MSMEs. The new agriculture laws will enslave our farmers."

The new agriculture laws will enslave our Farmers.#ISupportBharatBandh