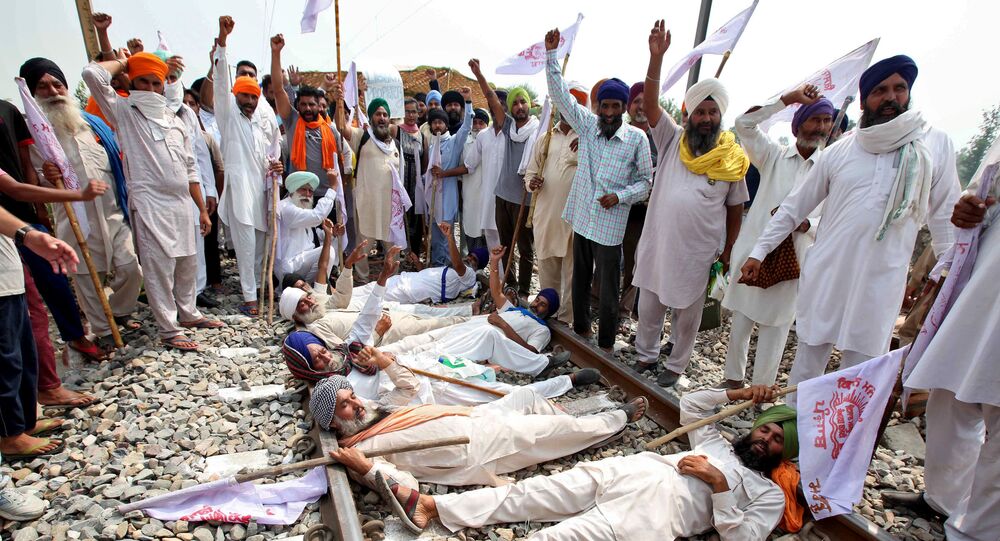 Prime Minister Narendra Modi and his Agriculture Minister Narendra Singh Tomar have said several times in the past week that the system of buying crops from farmers based on the Minimum Support Price (MSP) will continue. They have clarified the recently passed Bills are aimed at giving cultivators the freedom to market their produce.

Farmers in India's Punjab state on Thursday began a three-day campaign ofd isrupting train services to protest against a series of Bills which have been recently passed by both houses of parliament.

The move has forced one of the five railway divisions under Indian Railways' Northern Railway Zone to suspend operating special trains.

The decision to suspend services was made to ensure passenger safety and protect railway property from damage, officials said.

At present, routine passenger train services remain suspended because of the COVID-19 pandemic.

The protests, called "Rail Roko", were started by the farmers' union Kisan Mazdoor Sangharsh Committee because they fear the Bills, recently passed by the Indian Parliament and awaiting Presidential approval before becoming laws, would pave the way for dismantling the Minimum Support Price (MSP) system, leaving them at the “mercy” of big corporates.

The protesters blocked the tracks and have been joined by hundreds of worried farmers from across the state of Punjab0.

According to reports, the protesters are getting support from several sections including government employees and labourers.

“We have appealed to representatives of political parties, ministers, Members of Parliament and lawmakers not to take part in the farmers' agitation,” said Kisan Mazdoor Sangharsh Committee chief Satnam Singh Pannu.

He further said they will surround leaders of the ruling Bharatiya Janata Party and publish the names of those who voted for the farm Bills.

As many as 31 farmers' organisations have called for Punjab to be entirely shutdown from Friday to protest against the Bills.

The Indian Parliament has passed this year the Essential Commodities (Amendment) Bill,the Farmers' Produce Trade and Commerce (Promotion and Facilitation) Bill and the Farmers (Empowerment and Protection) Agreement of Price Assurance and Farm Services Bill.