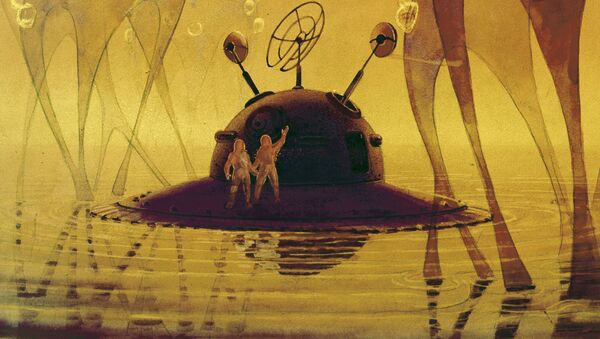 © Sputnik / С. Зимнох
/
Go to the photo bank
Subscribe
Ilya Tsukanov
All materialsWrite to the author
As one of the world’s major space powers, Russia has done its part helping humanity search for extraterrestrial life, recently beginning the construction of a powerful telescope capable of searching for signals coming from distant alien civilisations.

Russian cosmonauts have not been given any special instructions when it comes to greeting aliens, but would try to do so in a diplomatic matter, cosmonaut Sergei Kud-Sverchkov has said.

Kud-Sverchkov will join mission commander Sergei Ryzhikov in Expedition 64 to the International Space Station in October as a flight engineer.  This will be his first flight to space.

The Soyuz MS-17 spacecraft will carry the two Russian cosmonauts and NASA astronaut Kathleen Rubins to the ISS aboard a Soyuz-2.1a carrier rocket blasting off from the Baikonur Cosmodrome in Kazakhstan on October 14, with the spacecraft expected to reach its destination in a record 3 hours, 20 minutes. 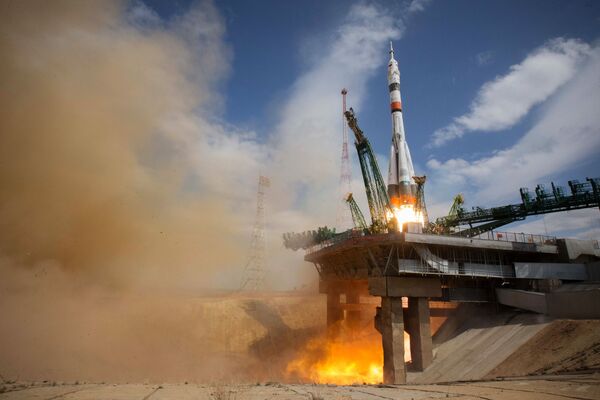 Launch of the 'Soyuz-2.1a' rocket carrier with the 'Soyuz MS-16' capsule carrying the ISS-63 crew from the Baikonur cosmodrome.
© Sputnik / Yuzhny SC / Roscosmos
/
Go to the photo bank

Kud-Sverchkov says a knitted cosmonaut doll named Yuri will become the mascot for Expedition 64, with the doll knitted by his wife, and named after Yuri Gagarin, the first human being in space.

Mission commander Ryzhikov told reporters that he would take with him a miniaturized Gospels, as well as a handful of Russian soil and stones from Mount Tabor, which Christians believe was the site of the transfiguration of Jesus following his resurrection.

For her part, NASA astronaut Kathleen Rubins said her plans include work collecting thousands of microbial samples inside the space station, and revealed that she plans to vote in the US presidential election from aboard the ISS.

Ryzhikov, Kud-Sverchkov and Rubins will be joined by three more NASA astronauts and a Japanese astronaut, who will make their way to the ISS in a SpaceX Crew Dragon capsule shortly after the Soyuz craft’s arrival. The mission will last until April 2021. Mission plans include work to activate the Bartolomeo scientific platform outside the European Space Agency’s Columbus lab module.

Kud-Sverchkov’s comments on whether there are any special directives for greeting extraterrestrials aren’t the first time a Russian cosmonaut has commented on the matter. In 2012, veteran cosmonaut Gennady Padalka told Chinese media that “detailed instructions” had been created at the United Nations “in case of first contact.” He added at the time that “sooner or later we will meet our like-minded brothers” from another planet.

Russian scientists have joined those from other countries in the search for extraterrestrial life, making plans to launch multiple new scientific missions to the Moon, Mars and Venus, and, earlier this year, announcing the construction of a high-powered telescope that can be used to search for signals from extraterrestrial civilizations transmitted in the optical spectrum.

000000
Popular comments
The only greeting the extraterrestrial know is shooting first ask question later. They are the super-intelligent creatures that are playing the mouse and cat throughout the years and bringing happiness to those idiots that enjoy going to bed with them.

landauroj
24 September 2020, 16:44 GMT
000000
Space expert McLelland saw a tall et in a space suit a Shuttle Cargo bay, chatting with the crew. When he went public he was thrown out of the program and lost all benefits. Search. 'The Mirror. Former NASA expert claims he saw nine-foot alien on space shuttle during mission'. So no problem you Murikan liars.
TommyT
24 September 2020, 17:10 GMT1
000000
Newsfeed
0
New firstOld first
loader
LIVE
Заголовок открываемого материала
Access to the chat has been blocked for violating the rules . You will be able to participate again through:∞. If you do not agree with the blocking, please use the feedback form
The discussion is closed. You can participate in the discussion within 24 hours after the publication of the article.
To participate in the discussion
log in or register
loader
Chats
Заголовок открываемого материала
Worldwide
InternationalEnglishEnglishMundoEspañolSpanish
Europe
DeutschlandDeutschGermanFranceFrançaisFrenchΕλλάδαΕλληνικάGreekItaliaItalianoItalianČeská republikaČeštinaCzechPolskaPolskiPolishСрбиjаСрпскиSerbianLatvijaLatviešuLatvianLietuvaLietuviųLithuanianMoldovaMoldoveneascăMoldavianБеларусьБеларускiBelarusian
Transcaucasia
ԱրմենիաՀայերենArmenianАҧсныАҧсышәалаAbkhazХуссар ИрыстонИронауОssetianსაქართველოქართულიGeorgianAzərbaycanАzərbaycancaAzerbaijani
Middle East
Sputnik عربيArabicArabicTürkiyeTürkçeTurkishSputnik ایرانPersianPersianSputnik افغانستانDariDari
Central Asia
ҚазақстанҚазақ тіліKazakhКыргызстанКыргызчаKyrgyzOʻzbekistonЎзбекчаUzbekТоҷикистонТоҷикӣTajik
East & Southeast Asia
Việt NamTiếng ViệtVietnamese日本日本語Japanese中国中文Chinese
South America
BrasilPortuguêsPortuguese
NewsfeedBreaking
16:52 GMTEMA Says Sputnik V Still Under Review, Gives No Comments on Assessment Timeline
16:41 GMTPutin Calls NATO Military Presence in Ukraine a Real Threat to Russia
16:25 GMTRussia and US Are on Right Track Following Geneva Summit, Putin Says
15:52 GMTUK’s Johnson Calls for 'Fast' Solution to Issues With N. Ireland’s Post-Brexit Protocol
15:40 GMTPutin Calls COVID-19 Pandemic Another Reminder of How Fragile Global Community Is
15:37 GMTPentagon: US Army, Navy Hold 3 Successful Tests in Bid to Advance Hypersonic Weapons' Development
15:33 GMTScottish Power Boss Slams 'Regressive' Price Cap, Warns of Energy Supplier 'Massacre' in UK
15:33 GMTEpstein's Ranch Had Computer Rooms 'The Size of Houses' to Spy on Guests, Claims Alleged Victim
15:32 GMTWHO Studying Sweden's, Denmark's Data on Side Effects of Moderna Vaccine
15:25 GMTPutin: Battle for Equal Rights in West Turning Into Dogmatism Bordering on the Absurd
15:23 GMTPutin & Xi Give Boris' PR Summit a Miss
14:54 GMTRadical Islamists Across South Asia 'Emboldened' by Taliban Win, Analyst Says on Kashmir Killings
14:53 GMTElon Musk’s Tesla Reiterates Call for India to Lower Import Duties on Electric Vehicles
14:52 GMTWHO to Inspect Sputnik V Vaccine in Russia in Coming Weeks
14:50 GMTClash of the Tech Titans: Twitter CEO Sees Facebook Metaverse as ‘Dystopian Corporate Dictatorship’
14:48 GMTManchester Arena Bomber's Brother 'Laughs In The Face Of Inquiry' After Fleeing To Middle East
14:45 GMTFrench Publishers Reach Deal With Facebook on Neighboring Rights
14:43 GMTUS Distributes 200Mln Vaccines to Over 100 Countries, Most Shots Go to Africa
14:42 GMTMoscow Mayor Sets Non-Working Days From 28 October to 7 November Due to COVID-19
14:36 GMTUnknown Disease Reportedly Kills Over 160 Children in DRC Since August