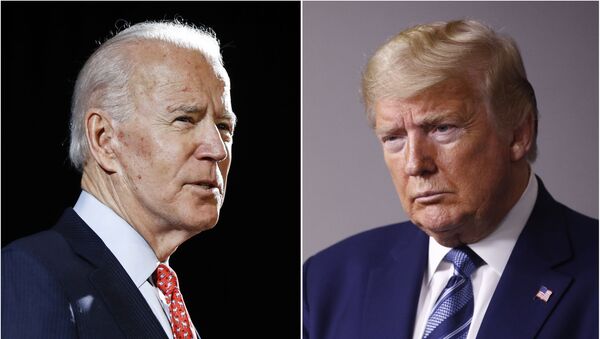 With 60 days left before the 2020 vote, US national pollsters are weighing up the chances of Donald Trump or Joe Biden coming out on top following their parties' convention events. American academics have explained why one shouldn't see polls as predictors, adding that a lot can happen before the November Election Day.

Donald Trump has narrowed the gap with his political rival Joe Biden in nationwide polls following the Republican National Convention (RNC). Furthermore, the incumbent president has added to his lead over the former vice president in Georgia, with 47.9 versus 40.5 percent, according to the latest Channel 2 Action News/Landmark Communications poll.

On 29 August, Morning Consult acknowledged that the Republican presidential nominee is now trailing his Democratic contender by only 6 percentage points, while previously Biden led with a two-digit margin. A new Yahoo/YouGov poll also indicates a 3-point post-convention shift for Trump.

However, a new Axios-SurveyMonkey study argues that Trump "didn’t make himself more appealing to voters" during the RNC event, but obviously "hurt" Joe Biden, who has seemingly lost a number of independent votes. CNN also insists that there has been no Trump bounce out of the conventions, citing its "poll of polls".

Not all surveys are created equal, says Timothy Hagle, a political science professor at the University of Iowa, suggesting that the devil is always in the details.

"Each pollster has different procedures to find the appropriate set of respondents for a poll", the political scientist explains. "Even assuming that a pollster is doing a good job in terms of accurately measuring attitudes, those interpreting polls should not compare different polls because of the different procedures used.​ In addition, one must be careful in knowing whether a poll sampled all adults, registered voters, or likely voters".

Accurate interpretation is a problem, since one often does not see enough information about any particular poll to fully understand it, according to the professor. To make matters even more complicated, sometimes a survey is presented in a tweet with no clarifications.

​"Even in full articles, however, we often aren’t told how big the sample was or what the MOE was, let alone the ideological mix", he says. "If there’s a link to the pollster’s methodology it helps, but not many people who see the results will dig deep enough to fully understand them".

The professor points out that he does not put too much emphasis on the polls, adding that nationwide surveys are not as important as those conducted in specific states, given the way the Electoral College works.

David Schultz, a political science professor at Hamline University, appears to share Hagle's stance. The professor draws attention to the fact that the US presidential election is not a popular vote, but de facto 51 elections to get to 270 electoral votes.

Back in 2016, nationwide polls were accurate in predicting Hillary Clinton's lead, according to Schultz: they said that the Democratic hopeful would win the national popular vote by 2-3%, and she did.

"Thus, my first point is ignore all national polls – look to state polls to understand the US presidential race this year and, specifically concentrate on the polls in seven swing states that will effectively decide the election", he says. "These states are Arizona, Florida, Michigan, Minnesota, North Carolina, Pennsylvania, and Wisconsin".

The professor is by no means surprised by Trump's lead in Georgia: "Many Democrats have been hoping for several years that demographic and population changes in that state might mean their party could pick it up", he notes. "It is still a strong Republican state, at least for this election cycle".

On 1 September, Morning Consult shed light on the situation in 11 battleground states, stressing that Trump is losing grip in Arizona and that his Democratic contender still maintains a lead in the majority of swing states.

"Keep in mind polls are only snapshots in time and not predictors", Schultz stresses. "A lot can still happen in the next 60 days to change the polls in a few swing states, but for the most part most people have made up their minds how they plan to vote and the questions are whether they are in a swing state and will they actually vote?  This election will be decided by a few swing voters in seven states".