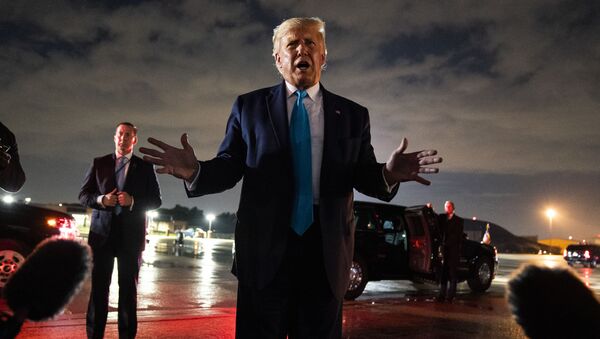 Oleg Burunov
All materialsWrite to the author
On Thursday, President Donald Trump in a tweet underscored that he had never called the nation's "great fallen soldiers anything other than heroes".

The US news outlet The Atlantic has quoted unnamed sources as saying that in 2018 President Donald Trump refused to visit a First World War cemetery in France because he described dead American soldiers as "losers".

The sources claimed that POTUS made the comments during a conversation with senior staff members on the morning of 10 November 2018.

"Why should I go to that cemetery? It's filled with losers", Trump allegedly said at the time, referring in a separate conversation to the more than 1,800 US marines who lost their lives at the 1918 Battle of Belleau Wood in France as "suckers" for getting killed.

The White House, in turn, blamed the US president's cancelled visit on poor weather.

Separately, the source asserted that Trump refused to support the August 2018 funeral of Republican senator and Navy veteran John McCain, expressing anger that flags were flown at half-staff during the event.

POTUS was quick to reject the allegations as "fake news" in a series of tweets later on Thursday, when he insisted that although he had never been a "big fan" of McCain, "the lowering of our Nations [sic] American Flags, and the first class funeral he was given by our country had to be approved by me, as president, and I did so without hesitation or complaint".

Trump also emphasised that he had never called McCain a loser and would "swear on whatever, or whoever, I was asked to swear on", adding that he had also never called America's "great fallen soldiers anything other than heroes".

Viral
Trump Slams Late Senator McCain's Policies: 'I Was Never a Fan of John McCain'
White House chief of staff Mark Meadows, for his part, expressed regret over "the depths that people will go to during a lead-up to a presidential campaign to try to smear somebody".

POTUS has repeatedly criticised McCain, who passed away of cancer-related complications in 2018, saying last year that he would "never be a fan" of the late Republican senator.

In 2015, Trump claimed that McCain was "not a war hero", adding, "I like people who weren't captured", in an apparent nod to McCain being a prisoner of war between 1967 and 1973 after his plane was downed in Vietnam.