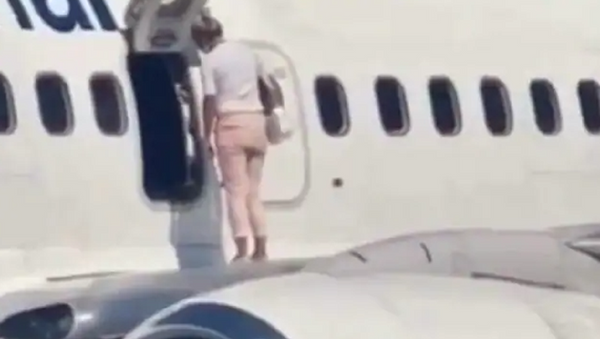 A woman in Ukraine was banned from flying with Ukraine International Airlines (UIA) this week after opening an emergency exit on a Boeing 737-86N plane and climbing onto its wing to cool down after complaining of being too hot.

A video shared online shows the mother of two casually walking on the wing of the plane after it had landed at Boryspil International Airport near the Ukrainian capital city of Kiev. She then climbs back into the cabin.

“The aircraft landed and almost all the passengers got off. She walked almost all the way from the tail to the emergency exit row, opened the door and went out,” another passenger on the plane told The Sun.

"By that time her two children were outside the plane and standing right next to me. They were surprised, saying: 'This is our mum,’” the passenger added.

According to the outlet, officials with aviation security, the border service, police and medical center of the airport were immediately alerted to the incident by the chief pilot on the flight.

Boryspil International Airport also confirmed the incident, while UIA announced that it had blacklisted the passenger from flying with the airline.

“A passenger of flight PS6212 Antalya-Kyiv illegally opened the emergency exit of the plane after it stopped near gate 11 of terminal D and went on to its wing,” UIA said, The Sun reported.

"The passenger was blacklisted for gross violation of aviation safety rules and behavior on board," the airline added.

The airline has also demanded that the woman pay a hefty fine.

Tests showed that the woman was not intoxicated at the time of the incident.