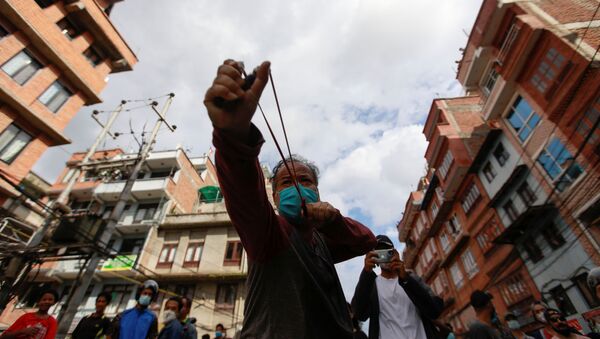 © REUTERS / NAVESH CHITRAKAR
Subscribe
Advitya Bahl
All materialsWrite to the author
India and China engaged in a skirmish in Chushul on the night of 29 August and have accused each other of crossing the loosely demarcated Line of Actual Control in Ladakh. India lost 20 soldiers in one such clash with the Chinese army in mid-June.

China has allegedly paid about $213,100 to various organisations based in Nepal to carry out protests and demonstrations against India along the 1,700 kilometre-long Indo-Nepalese border, according to Indian intelligence agencies.

"It is learnt that Chinese Embassy in Nepal has provided financial support to several organisations to conduct anti-India protests or demonstrations along India-Nepal border areas highlighting the recent border disputes and interferences of India in Nepal's internal/political matters. China has provided funds worth Rs 25 million (NPR) ($213,100) to these organisations," a senior Indian intelligence official told Sputnik, requesting anonymity.

Nepal and China are yet to comment on these allegations.

India-Nepal relations turned sour after Defence Minister Rajnath Singh on 8 May inaugurated an 80-km strategically crucial road, connecting the Lipulekh pass at 17,000 feet above sea-level with Dharchula in Uttarakhand state.

The road construction triggered a row between India and Nepal, with the latter claiming the area. Situated atop the Kalapani Valley in Uttarakhand, Lipulekh is a tri-junction between India, Nepal and China.

In June, Nepal brought out a new political map showing the contested area as its own. India rejected the new map, saying it was not based on historical facts or evidence.

Nepal also increased its force deployment across the Indo-Nepal border while the Indian government directed its armed forces to increase their presence at the Lipulekh tri-junction.

Amid the escalating India and China border tensions, the Nepal government has directed its forces to keep a close eye on the activities of the Indian army.

India and China have been involved in several face-offs at multiple points since May along the Line of Actual Control. Currently, the two sides are engaged in commander-level talks.

000000
Popular comments
India is doing the same and the Indian cheer leader is none other than Modi the warmonger. Give us all a break India and stop whinging. Get your troops to take off the fancy dress so there is less likelyhood the Chinese mistaking them for wild turkeys.
amike
3 September 2020, 19:25 GMT2
000000
Newsfeed
0
New firstOld first
loader
LIVE
Заголовок открываемого материала
Access to the chat has been blocked for violating the rules . You will be able to participate again through:∞. If you do not agree with the blocking, please use the feedback form
The discussion is closed. You can participate in the discussion within 24 hours after the publication of the article.
To participate in the discussion
log in or register
loader
Chats
Заголовок открываемого материала
Worldwide
InternationalEnglishEnglishMundoEspañolSpanish
Europe
DeutschlandDeutschGermanFranceFrançaisFrenchΕλλάδαΕλληνικάGreekItaliaItalianoItalianČeská republikaČeštinaCzechPolskaPolskiPolishСрбиjаСрпскиSerbianLatvijaLatviešuLatvianLietuvaLietuviųLithuanianMoldovaMoldoveneascăMoldavianБеларусьБеларускiBelarusian
Transcaucasia
ԱրմենիաՀայերենArmenianАҧсныАҧсышәалаAbkhazХуссар ИрыстонИронауОssetianსაქართველოქართულიGeorgianAzərbaycanАzərbaycancaAzerbaijani
Middle East
Sputnik عربيArabicArabicTürkiyeTürkçeTurkishSputnik ایرانPersianPersianSputnik افغانستانDariDari
Central Asia
ҚазақстанҚазақ тіліKazakhКыргызстанКыргызчаKyrgyzOʻzbekistonЎзбекчаUzbekТоҷикистонТоҷикӣTajik
East & Southeast Asia
Việt NamTiếng ViệtVietnamese日本日本語Japanese俄罗斯卫星通讯社中文（简体）Chinese (simplified)俄罗斯卫星通讯社中文（繁体）Chinese (traditional)
South America
BrasilPortuguêsPortuguese
NewsfeedBreaking
02:16 GMTGerman Politicians Slam University Guidelines to Implement ‘Gender-Neutral’ Language
01:39 GMTThe Last Time the US Gave an Ally Nuclear Technology, France Tried to Quit NATO
01:36 GMTAntarctic Ozone Hole Now 'Larger Than Usual', Covering Entire Continent, Scientists Say
01:22 GMTTrump Allegedly Joked That Jared Kushner Is ‘More Loyal to Israel Than US’
01:15 GMTVogue Releases Video of AOC’s ‘Dress Prep’ for Met Gala
00:25 GMTNo New Date Set for Resumption of Pretrial Hearings of 9/11 Case in Gitmo, Spokesperson Says
00:06 GMTUS Closes Del Rio Port of Entry on Texas-Mexico Border Due to Influx of Migrants
00:03 GMTNew Research Sheds Light on How to Tackle Obesity
YesterdayWhite House Confirms in Touch With France Over Envoy's Recall, Will Work to Resolve Issues
YesterdayTop Senate Defense Panel Republican Says Biden Ultimately Liable for Kabul Drone Strike
YesterdayGantz: Israel Could Accept Return to JCPOA if US Has ‘Plan B’ for Iran’s Nuclear Program
YesterdayUS Judge Denies Giuliani’s Request to Return, Destroy Seized Evidence, Reports Say
YesterdayFrench Court Finds Man Guilty of Cartoons Portraying Macron as Hitler Over COVID-19 Policies
YesterdayAustralia's Great Emu War: How a Nation Declared War on a Bird and Lost
YesterdayBlinken Vows to ‘Keep Normalization Marching Forward’ on One-Year Anniversary of Abraham Accords
YesterdayEx-Algerian President Abdelaziz Bouteflika Reportedly Dies Aged 84
YesterdayAct of Sabotage Results in Power Outage in Damascus, Energy Minister Says
YesterdayOld Friends Are Not the Best?
YesterdayMilley Assured Pelosi That US Military, Not Trump, Controlled the Nukes, Vice Chairman Says
YesterdayFed. Chief Powell Orders Sweeping Ethics Review Amid Trading Scandal at Federal Reserve