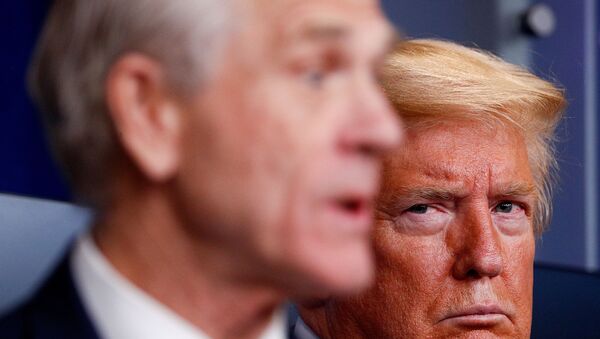 Muhammad Osman
All materialsWrite to the author
It is not the first time White House trade adviser Peter Navarro, as well as others in the administration of US President Donald Trump, have criticized the nation’s northern neighbor Canada on trade, as the presidential aide claimed in June 2018 that Canadian Prime Minister Justin Trudeau was running “bad-faith diplomacy” with the US.

Sciutto's new book, ‘The Madman Theory: Trump Takes On the World’, reviews Trump’s foreign policies. The book title refers to a political theory commonly associated with the foreign policy of former US President Richard Nixon, when the 37th US president, during the Cold War era, sought to make the leaders of rival Communist Bloc countries think he was irrational and volatile.

Navarro criticized Canada’s role in the US-led NATO coalition in Afghanistan, rejecting the idea that Ottawa was doing Washington “a favor” in its decade-long military presence in the war-torn country.

“Were they doing us a favor, or were they brought into the idea they needed to do that as part of the global effort against terrorists?” Navarro said in a recorded audio interview, quoted by the CBC. “I mean, if they were just doing us a favor, maybe their government should have been thrown out of office. I mean, every time that a Canadian shows up in a uniform, it’s doing us a favor? How’s that work?”

The Trump-appointed advisor took a swipe at Canadian cross-border policies toward the US, accusing Ottawa of serving as a “way station” for Chinese products that would otherwise be subject to strict US tariffs.

“What’s good about Canada?” Navarro said to book author Sciutto. “It’s like this blue-eyed brother kind of thing. It’s just Canada. It has its own national interests and self-interests.”

In an interview with CTV News, former US Defence Secretary and CIA director in the Obama administration, Leon Panetta, refuted Navarro’s opinions regarding Canada, arguing that Ottawa has been “in the foxhole” with Washington and was a long-standing and trusted ally long before Trump came to the White House.

In June 2018, following the 44th G7 summit in Quebec, Trump advisor Navarro insisted that Canadian Prime Minister Justin Trudeau was exhibiting “bad-faith diplomacy” toward the US, ramping up his rhetoric by declaring that there was a “special place in hell” for the Canadian leader.

Tensions between the US and Canada on trade issues escalated recently after the Trump administration re-imposed a 10 percent tariff on Canadian aluminum, prompting PM Trudeau to vow that his government “will impose countermeasures that will include dollar-for-dollar retaliatory tariffs”.

The US tariffs on Canada’s aluminum imports, originally 25 percent, were lifted in May of 2019, after reaching an agreement as part of the US–Mexico–Canada trade deal (USMCA), an updated version of the North American Free Trade Agreement (NAFTA).