‘Prepared to Win’: Pentagon Chief Lays Out US Plan to Defeat ‘Pacing Threat’ of China 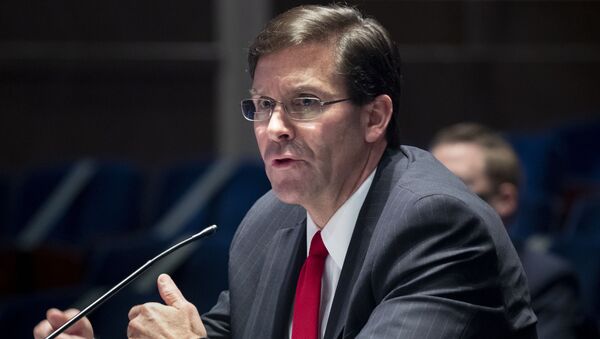 © AP Photo / Michael Reynolds
Subscribe
At a Thursday forum, US Defense Secretary Mark Esper expounded on the expanding scope of the Pentagon’s plan to devote all efforts to defeating China, which he regards as a “pacing threat” under the control of the Communist Party of China (CPC).

Esper told an audience at the Daniel K. Inouye Asia-Pacific Center for Security Studies in Honolulu, Hawaii, on Thursday that as the Pentagon more fully implements the 2018 National Security Strategy and focuses on “great power competition,” it is steadily bringing new assets to bear against China in particular.

''One of the goals that drives our implementation of the [strategy] is to focus the department on China,'' Esper said, identifying the People’s Republic of China as a “pacing threat” to the United States.

According to the Pentagon boss, who was chief of staff at the conservative Heritage Foundation think tank and vice president for government relations at defense contractor Raytheon before becoming secretary of the Army in 2017 and assuming his present office in July 2019, China has the world order “under duress” as it attempts to “undermine and subvert the rules-based order to advance their own interests – often at the expense of others.''

However, consistent with past characterizations by Secretary of State Mike Pompeo and others, Esper very specifically faulted the Communist Party of China, claiming it had failed in its pledges not only abroad, but also at home, citing the country’s national security law passed in June, which included Hong Kong for the first time.

''To advance the [Chinese Communist Party's] agenda, the People's Liberation Army continues to pursue an aggressive modernization plan to achieve a world-class military by the middle of the century,'' Esper said. ''This will undoubtedly embolden the PLA's [People’s Liberation Army’s] provocative behavior in the South and East China Seas, and anywhere else the Chinese government has deemed critical to its interests.''

The Pentagon reintroduced this angle of attack against China in June 2019 in its Indo-Pacific Strategy Report, which singled out the CPC, but which also focused on alleged anti-Muslim politics in China, suggesting Beijing posed a threat to regional Muslim nations.

This is similar to how the Trump administration has postured against socialist movements in other countries, such as Cuba and Venezuela, but also against the rising tide of socialism within the United States, which US President Donald Trump has pledged “will never be a socialist country.”

“Our robust network of allies and partners remains the enduring asymmetric advantage we have over near-peer rivals, namely China,” Esper said on Thursday. ''Our shared security concerns and desire to maintain a free and open Indo-Pacific have yielded countless bilateral and multilateral initiatives throughout the region aimed at strengthening and expanding defense cooperation and alignment."

These initiatives have included attempting to circumvent the ongoing dialogue between China and the Association of Southeast Asian Nations (ASEAN) on forming a code of conduct for the South China Sea by substituting a US-created one, and more than $22 billion in foreign military sales to US partners in the region in fiscal year 2020 alone.

Esper also noted he had directed the National Defense University, an educational institution in Washington, DC, for the US Armed Forces, to “refocus its curriculum by dedicating 50% of the coursework to China,” noting China will now be taught as “the pacing threat in all of our schools, programs and training.”

The Pentagon chief boasted of the “largest research and development budget in the department’s history,” some $104.6 billion in research, development, test and evaluation projects provided by the 2020 defense budget. Stars and Stripes noted the Pentagon has asked for an increase of $2 billion to that budget in fiscal year 2021, which begins in October.

“We are divesting from legacy systems and focusing on modernizing our force so we can deter, compete - and if necessary, fight and win - across all domains: air, land, sea, space and cyberspace,” Esper said, noting they were now “prioritizing the development and deployment of game-changing technologies, such as hypersonic weapons, 5G and artificial intelligence.”

“These efforts prepare our military for future conflicts that we hope we won’t need to fight but must - and will - be prepared to win,” Esper said.

000000
Popular comments
every one,every where,will have to do what they can to bring the rabid beast down,especially the murcans them selves

karlo marx
27 August 2020, 22:20 GMT6
000000
Speaking as a TRUE son of the DEVIL - LUCIFER the PRINCE OF THIS WORLD When they OPEN their mouths you know them and in their eyes you see they have NO SOUL !!! Blood thirsty men who have exchange their SOUL for power - money & fame.