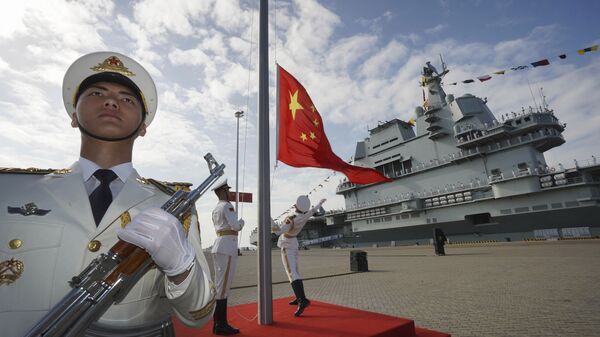 Earlier this week, the US Office of Foreign Assets Control (OFAC) introduced a fresh round of sanctions against China's Xinjiang Production and Construction Corps (XPCC) amid allegations of human rights abuses.

The United States has blacklisted 24 Chinese companies over their alleged role in building military fortifications on artificial islands in the South China Sea, the US Commerce Department announced in a press release on Wednesday.

“Department of Commerce (Commerce) added 24 Chinese companies to the Entity List for their role in helping the Chinese military construct and militarize the internationally condemned artificial islands in the South China Sea,” the release said.

“Despite protests from the United States and other countries, the government of the People’s Republic of China (PRC) has been rapidly building the artificial islands since 2013, enabling the Communist Chinese Party’s (CCP) militarization of disputed outposts in the South China Sea to undermine the sovereign rights of US partners in the region.”

At the same time, US Secretary of State Mike Pompeo announced in a statement that the US will ban certain Chinese nationals allegedly involved the militarization of the South China Sea from entering the country.

“Today, the Department of State will begin imposing visa restrictions on People’s Republic of China (PRC) individuals responsible for, or complicit in, either the large-scale reclamation, construction, or militarization of disputed outposts in the South China Sea, or the PRC’s use of coercion against Southeast Asian claimants to inhibit their access to offshore resources,” Pompeo said.

The Commerce Department said in its release that China has Since constructed more than 3,000 acres across seven features in the South China Sea since 2013, including air defence and anti-ship missile features.

“In addition, the PRC’s dredging and construction of certain outposts violate the sovereign rights of the Republic of the Philippines, as determined by the Permanent Court of Arbitration in its July 2016 award in a case brought by the Philippines against the PRC,” the department said. “In the Entity List additions, Commerce determined these entities enabled China to construct and militarize disputed outposts in the South China Sea.”

US Set to Slap Sanctions on Key Xinjiang Conglomerate Amid Trade War With China, Report Says
China claims the South China Sea as sovereign territory and has built military bases on artificial islands. Vietnam, Malaysia, Brunei, the Philippines and Taiwan are also making claims to parts of the strategic body of water closer to their own shores.

The United States views the sea as an international waterway and routinely defies China with patrols by US and allied warships in so-called freedom of navigation exercises.

The territorial dispute centres around strategic shipping, fishing and energy resources dates back to the immediate post-World War 2 period. China and the ASEAN group of nations began negotiating on a ‘code of conduct’ for the region in 2002, but little progress has been made since the early 2010s amid ongoing US ‘freedom of navigation’ missions throughout the area.