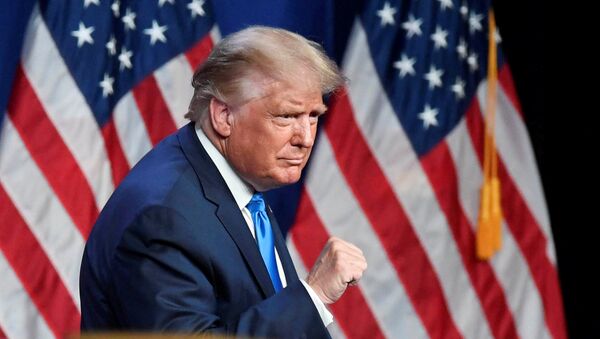 WASHINGTON (Sputnik) - US President Donald Trump's campaign strategists have expressed confidence that he holds a strong position in crucial battleground states across the United States, especially in the South and Midwest, senior adviser Jason Miller suggested on Monday.

"We feel very good about where we are in the South [...] I feel very confident where we are in Pennsylvania," Miller said in a Washington Post podcast. "We're in good shape in Michigan [...] As the economy recovers, that's a state that holds a lot of promise. Biden's spending a million a week on TV in Michigan so they know they're in trouble there."

Miller expressed his confidence, based on the most recent polling, about the president's position in North and South Carolina, Florida, Arizona, Iowa and Ohio. He offered that Biden must take Michigan, Pennsylvania and Wisconsin, whereas Trump will need only one win to secure the November election.

The adviser stated that Biden had failed to get what he described as a big bounce in the polls coming out of the Democratic national convention.

The Trump advisor said that the president would base his re-election campaign strategy over the next two months on completely eradicating COVID-19 and restoring the economy.

"Joe Biden wants to manage COVID. Donald Trump wants to eradicate COVID. It will be one of the top items in his second term agenda," Miller declared during a Washington Post podcast. "You're going to see the jobs message: President Trump is the jobs candidate. People trust him much more than Joe Biden for running the economy".

According to an average of the most recent surveys published on poll aggregator realclearpolitics.com (RCP), Biden is ahead in most major battleground states including Pennsylvania (+5%), Florida (+5%), Wisconsin (+6%), Michigan (6%), and Ohio (2%). Trump leads in North Carolina by under 1 percent and by 2% in Iowa. Nationally the RCP average has Biden ahead by 7%. National polls in the US are generally considered to be casual barometer of the race, primarily as the electoral college format requires the candidates to win states, not the overall popular vote.