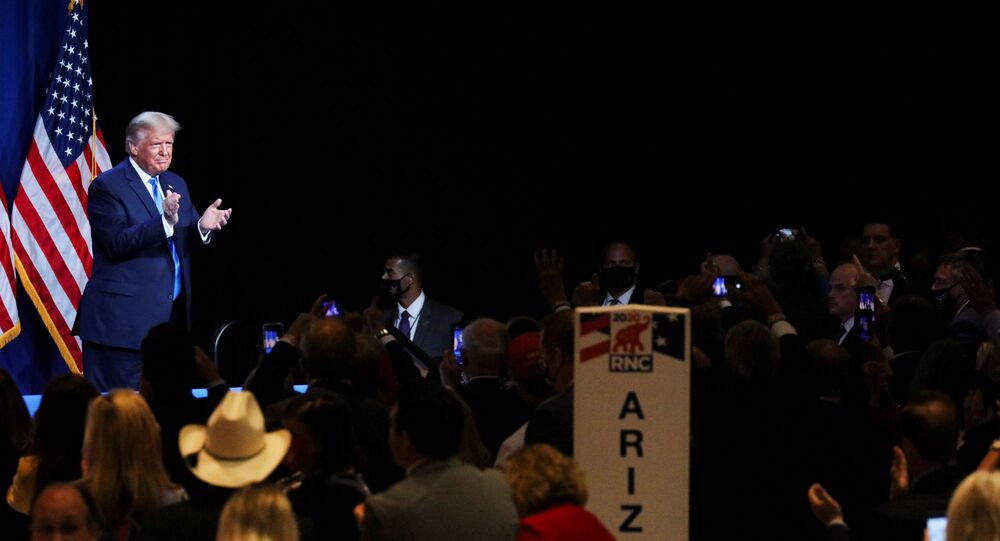 WASHINGTON (Sputnik) - US President Donald Trump told his supporters at the Republican National Convention on Monday that the only way the Democrats can win the November election is via sending out millions of mail-in ballots and stealing millions of votes in what he described as "the greatest scam in history."

Trump came to the National Convention in Charlotte, North Carolina, shortly after the delegates officially endorsed him as the Republican party’s candidate in the presidential election.

The US president accused the Democrats, who nominated former Vice President Joe Biden, of planning to impact election returns with 80 million ballots being sent by mail – even to people who have not asked for them - amid novel coronavirus fears.

Trump urged the Republicans to be very careful about the strong possibility of vote harvesting particularly in Democrat ruled US states, and pointed out to election disasters involving mail-in ballots earlier in New Jersey and other states.

"We have to be very careful because they are trying it again with these whole 80 million mail-in ballots that they are working on. Sending them out to people that didn’t ask for them. They didn’t ask, they just get them. It’s not fair, it’s not right," Trump said. "We have to be very, very careful and you have to watch. Everyone of you, you have to watch."

© REUTERS / POOL
U.S. President Donald Trump and Vice President Mike Pence give a thumbs up after speaking during the first day of the Republican National Convention, in Charlotte, North Carolina, U.S., August 24, 2020.

Trump called the massive mail-in voting the greatest scam in the history of politics of the United States and even "beyond our nation."

"Who is mailing them? Mostly Democrat states and Democrat governors. Suppose they don’t mail them to Republican neighbourhoods, that means they are not going to get them," he said.

Trump noted that Americans voted in person during both World Wars and offered an absentee ballot as a very safe method to vote during the novel coronavirus pandemic as it entails at checks as to who votes.