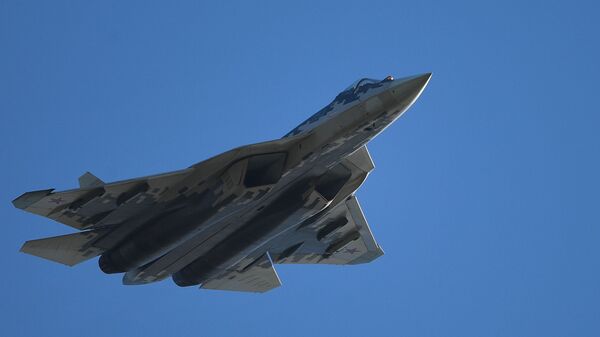 PATRIOT PARK, Russia (Sputnik) - South Korea is seeking military cooperation with Russia amid growing threat on the Korean peninsula, with particular interest in the technology of Russian fifth-generation planes, drones and the exploration of space, Kim Young Wook, air attache at the South Korean embassy in Russia, said.

"The great threat is from North Korea. Not only in the military sphere but also in political. Our government is trying to [establish] a permanent peaceful atmosphere in the Korean Peninsula. To do this we need cooperation with other countries, especially with Russia," Kim said on the sidelines of the international defence industry forum Army 2020.

According to the official, South Korea wants "to have cooperation in military technology with Russia."

The technology of Russia's fifth-generation planes, like Sukhoi Su-57 jets, and drones would be of great interest to South Korea, he noted.

According to Kim, as an air attache, he was very interested in developing technology in space.

"Korea is still a very powerful country in the military power but we also have to develop our technologies in cosmos, in the universe, all over the space. We have to learn more about experience and technology from Russia," he said.

Kim noted that it was an honor for him to visit Russia's Army 2020 forum and see the military hardware and technology Russia showcases. The diplomat added that the exhibition provided many opportunities to learn from Russia which has a lot of military experience.

Seoul expects to sign a memorandum of understanding in the military sphere with Russia during a visit of Russian President Vladimir Putin which Seoul expects later this year, Kim Young Wook said.

Earlier in the week, South Korean Ambassador to Russia Lee Sok-bae said that Seoul hoped that Putin would pay a visit to South Korea by the end of the year and that and the countries were engaged in consultations on organizing the visit.

"If Vladimir Putin comes to our country we can expand the spectrum of cooperation. In our military sphere, we are negotiating a memorandum, MoU [Memorandum of understanding]. if Vladimir Putin can visit our country, we can sign the MoU in the military sphere between South Korea and Russia," Kim said on the sidelines of the defence industry forum Army 2020 near Moscow.

According to the air attache, the talks on the MoU will move from negotiations on the lower level to the upper-level consultations.

"And then ministry of defence of Russia and Korea will have this memorandum," he said.

Kim noted that this year South Korea and Russia mark 30 years of diplomatic relations. Modern relations between the two nations started on 30 September 1990.

Yet, due to coronavirus pandemic and linked restrictions, South Korea did not have a chance to send a large delegation to Russia in recent months, according to the official.