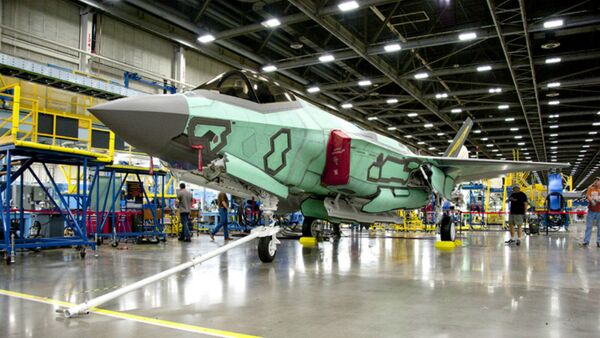 © Photo : Lockheed Martin
Subscribe
International
India
Africa
Ilya Tsukanov
All materialsWrite to the author
The Secretary of State arrived in Israel on Monday for talks with Prime Minister Benjamin Netanyahu as part of a trip to the region to promote the Trump administration's Mideast peace plan.

US Secretary of State Mike Pompeo has announced that the US would consider selling arms to the United Arab Emirates, but would also work to ensure that Israel continues to enjoy its military edge against its neighbours.

"The United States has a legal requirement with respect to qualitiative military edge. We will continue to honour that," Pompeo said, speaking to reporters in Israel after his meeting with Prime Minister Benjamin Netanyahu on Monday.

Netanyahu confirmed that the secretary had assured him that the US would work to preserve the superiority of Israeli military might in relation to other regional powers.

Pompeo's visit comes on the heels of the announcement of the US-brokered UAE-Israel peace deal, with Abu Dhabi becoming the first state in the Persian Gulf region and the third Arab country after Egypt and Jordan to normalize relations with Tel Aviv. A formal ceremony is expected to be held in Washington sometime in the coming weeks.

During his visit Monday, the secretary of state praised the normalization deal, and said he was "very hopeful that we will see other Arab nations join in this."

Netanyahu called the normalization treaty a "boon to peace and regional stability."

Last week, Netanyahu denied media reports that his cabinet had given the go-ahead to Washington for the sale of F-35 fighter jets to the UAE, saying the prime minister has "from the outset opposed the sale of F-35s and other advanced weapons to any countries in the Middle East, including Arab countries making peace with the State of Israel."

On Wednesday, US President Donald Trump confirmed at a press conference that the UAE would "like to buy F-35s," but added that the matter was "under review" and that "we'll see what happens." The UAE's foreign minister said Abu Dhabi was interested in purchasing the advanced jets, but stressed that its interest came about before the deal with Israel was announced.

Israel’s Netanyahu Denies He Approved Sales of US Fighter Jets to UAE Under Peace Deal
The US began delivering F-35s to Israel in late 2017, with the country allegedly using them for bombing missions in Syria and Iraq since then. The country has at least 26 delivered and operational F-35I aircraft in service, with two dozen more on order and a total of 75 planned to be purchased.

Turkey was the only state in the region which the US planned to deliver F-35s to, but Washington scrapped the plans and unceremoniously booted Ankara out of the programme in mid-2019 after Turkey began taking delivery of Russian-made S-400 air defence systems.

The US has provided tens of billions of dollars in military aid to Israel over the years, including $3.8 billion in fiscal year 2019. Tel Aviv is required to spend part of these funds on US military equipment.

According to figures compiled by the Stockholm International Peace Research Institute, between 2008 and 2018, Israel was the twelfth-largest buyer of US military equipment during that decade, spending some $2.91 billion on American arms. The UAE, meanwhile, was said to have purchased some $7.6 billion in weapons from the US during the same period. Saudi Arabia topped the list, shelling out $13.72 billion for American weapons from 2008-2018, including $3.35 billion in 2018 alone.