What is Known About the Military Base Where Mali Mutiny Originated 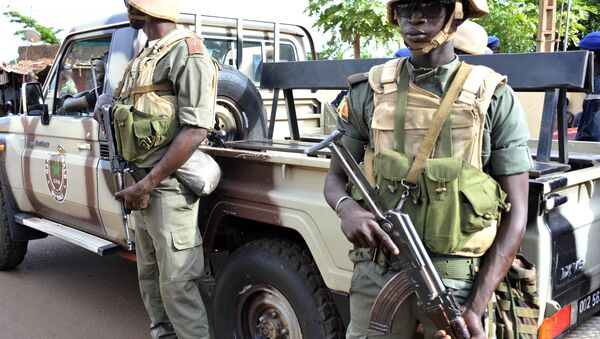 © AFP 2021 / HABIBOU KOUYATE
Subscribe
A group of officers from the armed forces of the landlocked West African nation of Mali began a mutiny, reportedly capturing the country’s president and prime minister and taking control of the capital Bamako on Tuesday.

The Mali military mutiny began at the garrison town of Kati, about 15 km northwest of Bamako, on Tuesday morning at about 8 am, with locals reporting soldiers firing their guns into the air, and armoured vehicles and tanks seen moving through the streets while local commanders were detained.

Apparently a military coup is underway in #Mali at Kati city, near the capital of #Bamako by #Turkish-backed soldiers. pic.twitter.com/hh5C3t8TaX

The mutiny is thought to have been motivated by soldiers’ financial grievances, with troops seizing a munitions depot.

The Kati military base is one of the largest in the country of 19 million, and includes a military hospital, and military academy where students are provided military training in addition to a basic education.

According to reports, President Ibrahim Boubacar Keita and Prime Minister Soumeylou Boubeye Maiga, who were detained during Tuesday’s unrest, have now been taken to the Kati camp.

URGENT – #Mali: Former President IBK is in the #Kati camp, Soundjata brought by soldiers loyal to Colonel Diaw, the new leader of the country.#OSINT #Military pic.twitter.com/Y56EjBcMz1

Tuesday’s unrest, which also saw the detention of other government officials and officers, comes in the wake of weeks of protests starting June 5, when opposition forces critical of President Keita’s alleged failure to deal with corruption and restore order in the country amid escalating jihadist and inter-communal violence took to the streets. The protests led to clashes between protesters and security forces between July 11-12, will 11 people killed, and over 120 others injured.