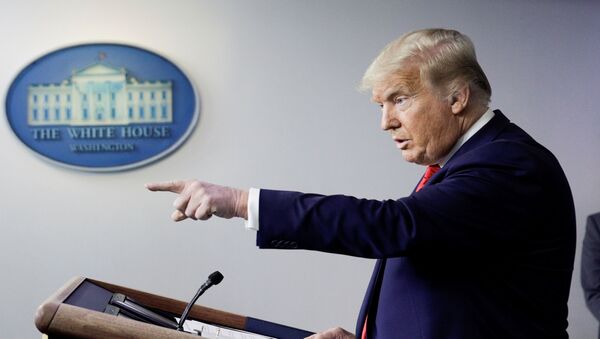 © REUTERS / TOM BRENNER
Subscribe
Daria Bedenko
All materialsWrite to the author
Earlier, Microsoft engaged in negotiations over the possible purchase of TikTok, after US President Donald Trump announced a decision to ban the Chinese-owned video app over concerns that it poses a threat to national security.

US President Donald Trump signed an executive order demanding that ByteDance, a company behind the TikTok video app, sell US TikTok operations within 90 days.

"In order to effectuate this order, not later than 90 days after the date of this order, unless such date is extended for a period not to exceed 30 days, on such written conditions as the Committee on Foreign Investment in the United States (CFIUS) may impose, ByteDance, its subsidiaries, affiliates, and Chinese shareholders, shall divest all interests and rights in: any tangible or intangible assets or property, wherever located, used to enable or support ByteDance's operation of the TikTok application in the United States, as determined by the Committee", the order said.

TikTok has been facing pressure in the United States amid concerns that it could pose a threat to national security - an allegation Trump reiterated in his executive order.

"There is credible evidence that leads me to believe that ByteDance [...] might take action that threatens to impair the national security of the United States," Trump said in his order.

Earlier, POTUS announced that he intended to ban TikTok in the United States over security concerns, demanding that ByteDance sell US operations to an American-owned firm. In early August, Microsoft confirmed reports of being in talks to purchase TikTok, noting, however, that there was no assurance that a deal would take place. Reports emerged suggesting that Twitter was also considering a "combination" with the video app.

Responding to allegations regarding national security threats, TikTok dismissed any "dependence" on the Chinese Communist party, insisting that all American data is kept in the US and has never been shared with the Chinese government.

Beijing denounced the actions of the Trump administration toward TikTok, insisting that forcing the sale of the app violated US free market principles.

Is the Order Unconstitutional?

After Trump’s announcement, Americans working with TikTok in the US said that they would challenge the president’s executive order, as they believe it could prevent the company from meeting its payroll obligations. Mike Godwin, an internet rights lawyer working on the lawsuit, said that the Trump administration is placing employees’ “constitutional rights, including the right to be paid, in jeopardy."

According to Robert Sedler, distinguished professor of law from Wayne State University, however, Trump’s order is not unconstitutional, as it focuses on US foreign affairs.

“The federal government has broad powers to regulate foreign affairs”, Sedler noted, adding, “I assume that Congress has delegated authority to the president to promulgate this order. The 5th Amendment gives the government broad powers to regulate economic matters. This regulation is reasonably related to protecting American economic interests. Thus, it is constitutional.”

000000
Popular comments
ByteDance should simply leave the US. 100 million Americans will no longer enjoy Tik Tok.
Tolerance
15 August 2020, 04:53 GMT10
000000
ByteDance should just pack up, lock the doors and get out of that corrupt ZionNazie Empire. and BTW tell the dotard to f* off