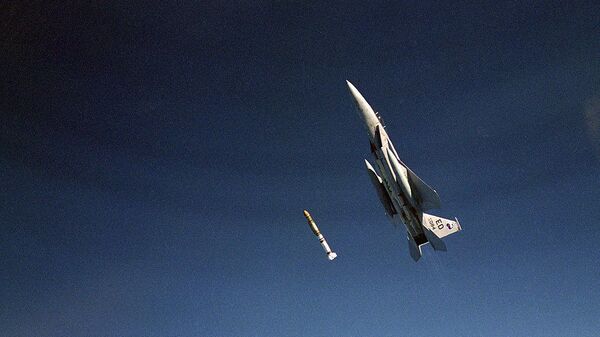 US defense leaders have firmly pointed the finger at Russia and China as the raison d’etre for the US Space Force (USSF), claiming the nations have “militarized space,” requiring the US to respond. However, what is really threatened is US space superiority, as the Pentagon has tested space weapons for decades.

US Space Command has raised warning bells about the challenging of US superiority in space since at least its 1997 “Vision for 2020,” but it was only in December 2019 that the USSF was formally created by US President Donald Trump.

In February 2020, Space Force Chief of Space Operations Gen. John W. "Jay" Raymond told the House Armed Services Committee's Strategic Forces Subcommittee that "we can no longer assume that our space superiority is a given. If deterrence fails, we must be ready to fight for space superiority."

"We will remain ready to defend US and allied freedom of action in space. We will deliver space combat power for the joint and coalition force and we're going to develop joint warfighters to serve in, to and from the space domain,” he said.

Further, in the Defense Space Strategy Summary in June 2020, the Pentagon articulated space warfare in the context of its previous 2018 National Defense Strategy, which stated that “inter-state strategic competition, not terrorism, is now the primary concern in US national security.”

“Space, however, is not a sanctuary from attack and space systems are potential targets at all levels of conflict,” the Defense Space Strategy Summary reads. “In particular, China and Russia present the greatest strategic threat due to their development, testing, and deployment of counterspace capabilities and their associated military doctrine for employment in conflict extending to space. China and Russia each have weaponized space as a means to reduce US and allied military effectiveness and challenge our freedom of operation in space.”

The document explicitly states the strategy’s purpose is to “establish, maintain, and preserve” the United States’ “comprehensive military advantage in space.”

Several types of weapons have been identified as part of this “weaponization” of space, but in truth, the US has long since tested and used nearly all of them itself.

In January 2007, China tested a direct-ascent anti-satellite (ASAT) weapon, successfully intercepting the non-operational Fengyun-1C weather satellite at an altitude of 534 miles by using a Dongfeng-21 ballistic missile. Likewise, in April 2020, the US fumed that Russia had ostensibly tested a similar weapon.

“The United States is ready and committed to deterring aggression and defending the Nation, our allies and US interests from hostile acts in space,” Raymond said at the time. 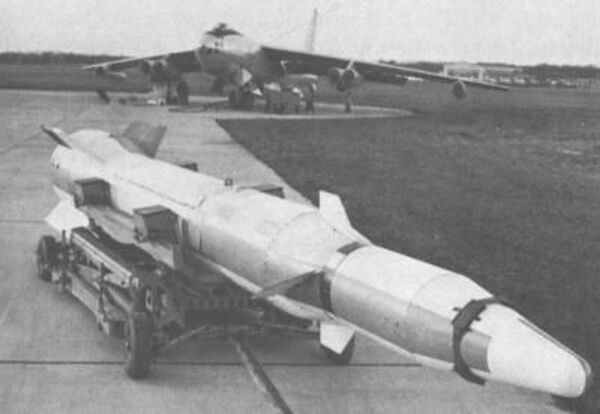 A "Bold Orion" air-launched ballistic missile (ALBM) and the B-47 Stratojet used to carry it in tests, 1960.
© US Air Force

However, almost since the Soviet Union launched the first satellite, Sputnik 1, into space in 1957, the Pentagon has been developing and testing various anti-satellite missiles.

As early as 1958, the US Air Force began testing a series of air-launched ballistic missiles (ALBMs) that could variably serve as nuclear weapon delivery systems or satellite interceptors. Between May 1958 and October 1959, the US carried out 12 tests of the Bold Orion ALBM, fired from a B-47 Stratojet, the last of which made a mock attack on the Explorer 6 satellite, some 156 miles up. The missile passed just 4 miles from Explorer 6, and it was anticipated that if it had been armed with a nuclear weapon, the attack would have been successful. 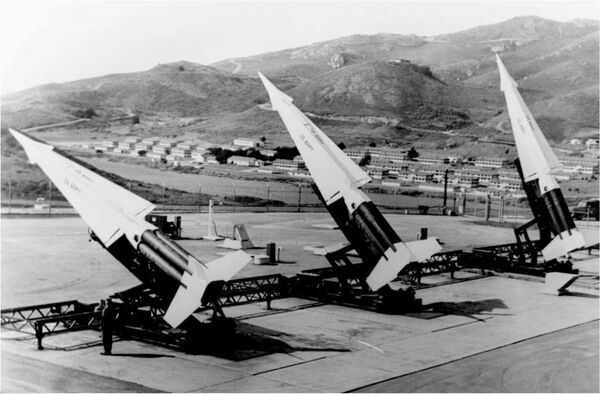 Another project, High Virgo, tested an ALBM fired from a B-58 Hustler at the Explorer 5 satellite in September 1959, but this test failed, and the entire concept of ALBMs soon gave way as intercontinental ballistic missiles (ICBMs) became more viable weapons.

However, nuclear weapons continued to be explored as anti-satellite weapons, especially after the 1958 Hardtack Teak test, detonated 47 miles up, demonstrated the destructive effects of an electromagnetic pulse at high altitudes. Four years later, the Starfish Prime test saw the US detonate a nuclear weapon 250 miles up - the same altitude the International Space Station orbits at today - and seriously damage three satellites. 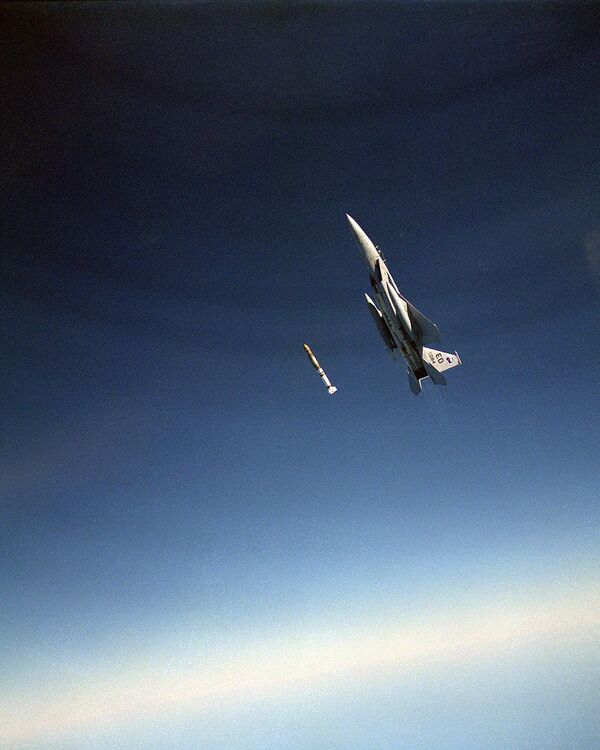 An air-to-air left side view of an F-15 Eagle aircraft releasing an anti-satellite (ASAT) missile during a test on Sep. 13, 1985, at the Pacific Missile Test Range, CA
© Paul E. Reynolds

Then, in May 1963, the US tested its first direct-ascent anti-satellite missile, an adapted Nike-Zeus ballistic missile interceptor fired from Kwajalein Atoll in the South Pacific that destroyed an AGENA-D satellite using a nuclear weapon. The successful test saw then-Defense Secretary Robert McNamara order a nuclear-armed Nike-Zeus missile to be active at all times at Kwajalein the following month, ready to be deployed against Soviet satellites. The US also used its PGM-17A Thor ballistic missiles in an ASAT role into the 1970s.

In 1985, however, the US took this a step further, successfully shooting down the Solwind solar observation satellite using an ASM-135 missile fired by a specially modified F-15 Eagle fighter jet. The F-15 had to engage in a supersonic “zoom climb” and had special equipment to guide the missile to its target.

Another piece of equipment the USSF has pointed to is an inspector satellite tested by Russia in early 2020, which supposedly maneuvered close to a US satellite. Inspection is not illegal, but this didn’t stop US Space Command from calling it a “space weapon,” and Raymond denouncing it as “further proof of Russia’s hypocritical advocacy of outer space arms control proposals designed to restrict the capabilities of the United States while clearly having no intention of halting their counterspace weapons programs.”

What Raymond didn’t mention is that the US pioneered this technology, too. In 1990, the US launched a secret “Prowler” satellite, the purpose of which was to approach other satellites in geosynchronous Earth orbit for surveillance.

“This is not unique to Russia,” Brian Weeden, a space policy expert at the Secure World Foundation, told MIT Technology Review. “It doesn’t happen every day, but it’s a capability that China, the US, and others have been testing out over time.”

Another project launched in 2014 by the Air Force Research Laboratory, called Automated Navigation and Guidance Experiment for Local Space (ANGELS), has tested a similar capability.

Concerns have also been raised about Russia’s Peresvet ground-based laser weapons system, but the US has already tested directed energy weapons in space.

In 1989, as the US was attempting to set up a satellite-based ballistic missile interceptor, the Strategic Defense Initiative, it test-fired a neutral particle beam in an experiment called Beam Accelerator Aboard a Rocket (BEAR).

"The 24-foot, 3,500-pound beam accelerator was launched to an altitude of 125 miles on a Minuteman 2 rocket," the Los Angeles Times reported after the July 1989 test. The weapon fired for four minutes but proved unwieldy. As Sputnik has reported, the Pentagon has recently raised hopes of reviving such a weapon.

In effect, most ballistic missiles are themselves space weapons, since their high trajectory takes them into space before delivering their payload to some far-off target. According to Space.com, an ICBM can have an apogee of some 750 miles up. However, the stationing of nuclear weapons in space has been explicitly banned by several arms limitation treaties, including the 1967 Outer Space Treaty.

Incidentally, it was the Soviet Union that introduced such a weapon in what was called a “fractional orbital bombardment” weapon, which would have launched a nuclear warhead into polar orbit over Antarctica that could be de-orbited to strike the United States from the south, where it had no missile early warning radars. The USSR also mounted an autocannon for self-defense on the Almaz space station in the years before the Outer Space Treaty was approved.

Another option repeatedly explored by the US military has been Project Thor, a proposal to base kinetic energy weapons in space and drop them on unsuspecting enemies. As Sputnik reported, such a weapon, if made of tungsten and roughly the size of a telephone pole, would have the destructive effect of a nuclear bomb, but leave no residual radiation. 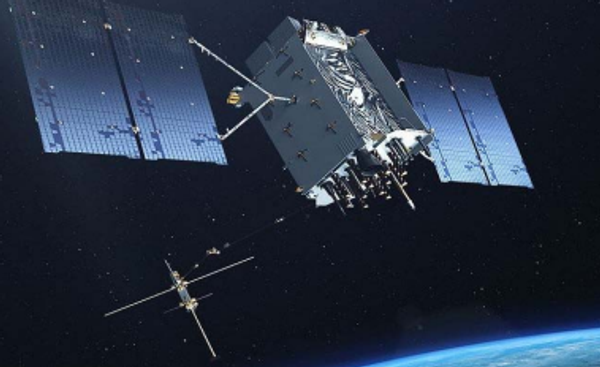 An image taken from the June 2020 Defense Space Strategy Summary that appears to depict a space-based kinetic energy weapon similar to the abandoned Project Thor. The image is uncaptioned in the document.
© US Space Force

Curiously, what seems to be such a weapon appears in an illustration in the US Space Force’s Defense Space Strategy Summary from this past June. Could this hint at a return of Project Thor?