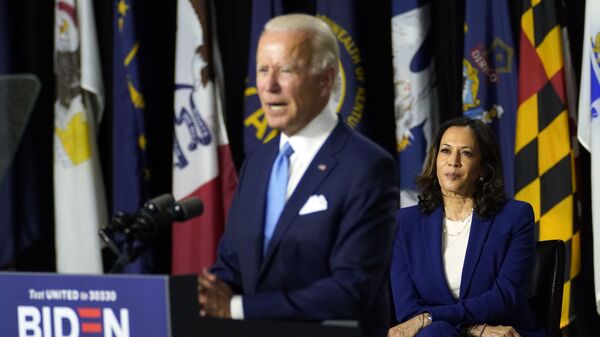 US Democratic presidential candidate Joe Biden blasted US President Donald Trump on Wednesday over the president’s negative remarks aimed at his 2020 running mate, Sen. Kamala Harris (D-CA), noting that "whining" is was the commander-in-chief "does best."

Speaking from the pair’s first joint campaign event in Delaware, Biden noted that one “could have set your watches” to the exact moment that Trump’s camp began to critique Harris as Biden’s vice presidential pick.

"Donald Trump has already started his attacks, calling Kamala 'nasty,' whining about how she is 'mean' to his appointees. It's no surprise because whining is what Donald Trump does best," Biden said during the event. "Better than any president in American history."

"Kamala Harris has had your back and now we have to have her back," Biden added.

Moments after Harris arrived at the podium, the California senator quickly jumped to calling out Trump over his administration's failures to handle the COVID-19 pandemic and associated economic concerns.

Harris noted during the event that her experience as a prosecutor tells her that "the case against Donald Trump and Mike Pence is open and shut."

Trump "inherited the longest economic expansion in history from [former US President] Barack Obama and Joe Biden. And then, like everything else he inherited, he ran it straight into the ground," Harris added.

Biden announced Tuesday that he chose Harris as his 2020 running mate. If Biden is elected, Harris would become the first Black and female vice president.

Harris, the daughter of immigrants, has been very vocal on racial justice issues, as well as matters like corruption, women's rights and election interference.