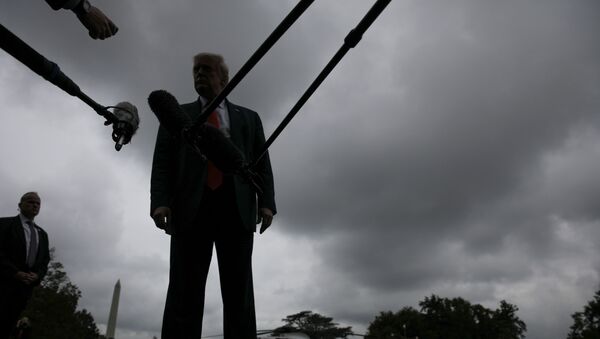 © REUTERS / CARLOS BARRIA
Subscribe
Max Gorbachev
All materialsWrite to the author
The incident occurred on 10 August as US President Donald Trump was speaking at a press briefing. The president and other officials taking part in the event were escorted by security agents into a hidden room.

According to the agency, officers at the scene rendered first aid to the shooter and emergency medical services were also called. An investigation has been launched into the incident, as well as a review of the actions of the officer who shot the suspected shooter. There has been no information on the perpetrator’s condition. The District of Columbia fire department previously said that he had suffered serious or critical injuries.

The incident caused Trump to be whisked away from the podium by USSS agents, as the president and other people taking part in the briefing were escorted into a hidden room. Several minutes later, Trump returned to the room containing the press and said that the situation was under control.

Answering a reporter's question of whether he was rattled by the incident Trump said: "It's unfortunate that this is a world, but the world's always been a dangerous place. It's not something unique".