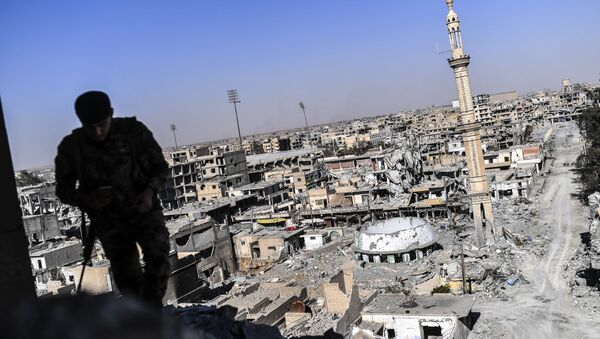 On 11 August, sheikhs and elders of the Arab Al-Uqaydat tribe met in the Syrian Deir ez-Zor province, agreeing that the US-led coalition is responsible for murdering tribal sheikhs in the province, and demanding that the region be cleared of SDF forces, local control returned to the Syrians, and stating: “leave the Arab region to the Arabs”.

Sputnik’s correspondent in al-Hasakah reported, citing civilian sources in Deir ez-Zor, that nearly 5,000 people attended a meeting of Al-Uqaydat sheikhs and elders. They agreed that the pro-American coalition and the SDF have one month to turn over all of those involved in murdering sheikhs in the Deir ez-Zor governorate, and demanded that the SDF and the coalition leave the province.

The tribal sheikhs condemned the security chaos caused by a series of murders of tribal elders and sheikhs, as well as condemning widespread corruption. These factors are reported to have forced the tribe to make the decision.

The most recent high-profile crime attributed to SDF fighters is the assassination of Sheikh Mutashar al-Hafil and his relative Dar Mihlef al-Khalaf, which has provoked a wave of protests and aggression by local tribes against both the armed SDF groups and the pro-American coalition.

"We are calling on the international coalition to transfer control over the province directly to its Arab population, respecting Syria’s territorial integrity, as well as the rights of Syrian citizens", the trial elder's statement said.

Reportedly, the month given to the SDF and the coalition to meet the ultimatum starts today, August 11, 2020.