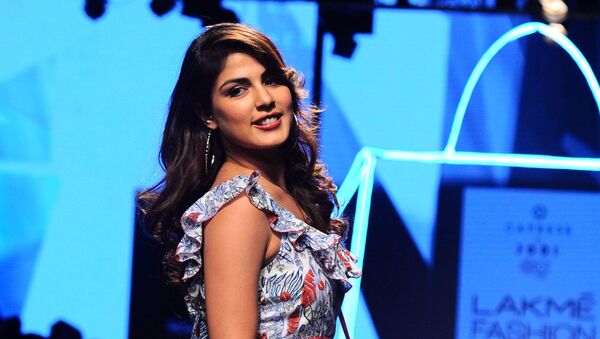 © AFP 2021 / SUJIT JAISWAL
Subscribe
New Delhi (Sputnik): Bollywood actor Sushant Singh Rajput was found hanging from the ceiling fan at his residence in Mumbai on 14 June. Last month, Bihar Police booked Sushant’s ex girlfriend Rhea and several others under charges of abetment to suicide based on a complaint by Sushant’s father KK Singh.

B-Town actor Sushant’s ex girlfriend Rhea Chakraborty, accused of abetting his alleged suicide, on Monday filed a fresh plea in India’s apex court claiming that an unfair trial by media had found her already guilty in a case involving the actor's suspicious death.

In her plea, Rhea has alleged she has already been convicted by the media even before foul play in the Sushant’s death had been established.

She continued by saying  that even though actors Ashutosh Bhakre and Sameer Sharma have also committed suicide like Sushant in the last 30 days, "there is not even a whisper in media about these cases".

“Sushant's case is being ‘blown out of proportion’ because of ‘impending elections in Bihar’ and that purportedly the first information report (FIR) at Patna was registered because the Bihar state chief got involved in the registration of case,” the plea mentioned.

Rhea has also mentioned that the registration of the police complaint at Patna, Bihar by Sushant’s father was without jurisdiction.

“Even though the investigation on the case registered in Patna has been transferred to India’s top probe agency Central Bureau of Investigation (CBI), it is Mumbai Police which alone has jurisdictions to probe Sushant’s death,” the plea stated.

The Supreme Court is yet to list the matter.

Meanwhile, Rhea and her family members are currently being interrogated by India's economic intelligence agency Enforcement Directorate (ED) in an alleged case of money laundering worth $2 million (INR 150 million) against her and her family members, allegedly after finding suspicious transaction from Sushant’s bank account.

People from across the country have been demanding a thorough investigation into Sushant's death.

On 14 June, young Bollywood star Sushant Singh Rajput was found hanging from a ceiling fan at his Mumbai residence. His death was officially ruled a suicide, as the actor was reportedly battling depression.