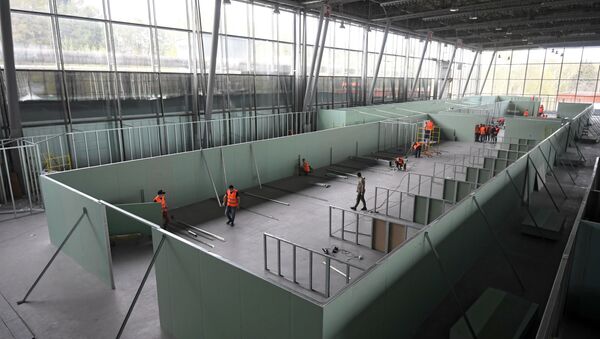 The installation, created by graduate students at MEPhI’s Institute of Engineering Physics for Biomedicine, Artem Shabanov, Denis Glechik and Alexei Nekhoroshev, is based on the photodynamic method, where the body’s large surfaces are irradiated with red spectrum light. The method was previously developed at the institute to diagnose and treat tumours, Victor Loshchenov, head of Department of Laser Micro-, Nano- and Biotechnologies at MEPhI, said.

"This is one of the newest therapies using photosensitizers. They are injected into the patient’s body, where they are captured by viruses and, under the influence of radiation, kill the virus. Photosensitizers deactivate the immunocompetent cells responsible for the cytokine storm, thereby avoiding the immune system’s deadly reaction to the virus. The photodynamic technique is highly efficient and has a minimum number of side effects; it practically doesn’t lead to complications", he said.

According to Loshchenov, until today there has been no installation that would allow irradiation with sufficient power and energy density without harming the patient. The existing systems had a power of 1.5 W, but this was not enough: it was necessary to increase the power by almost 10 times, at least to 12 W.

"The work was not easy: institutes and laboratories were closed because of the pandemic. The undergraduates moved the 3D printers to their dorms, everything was discussed online. They not only developed but also manufactured 12 W devices, in accordance with strict medical safety requirements. The devices were immediately installed at Sechenov First Moscow State Medical University", Victor Loshchenov explained.

He said that more than 40 COVID-19 patients have received the new treatment. Right after irradiation, the patients showed an increase in oxygen saturation, the pain in the lungs disappeared, and their sense of smell returned. This group of patients recovered much quicker than those patients who didn’t receive radiation.

"In the Institute of Engineering Physics for Biomedicine’s biomedical photonics master’s programme, we teach to use laser, spectroscopic and video fluorescent technology in biomedical research as well as in treating patients. We train developers of new diagnostic methods and high-tech medical devices to treat and prevent cancer, autoimmune and viral diseases, atherosclerosis, and antibiotic-resistant infections. We also train specialists in the diagnosis and treatment of patients with our devices", Viktor Loshchenov said.

He added that today, hundreds of high-tech medical devices developed in the laboratory of GPI, where the Institute of Engineering Physics for Biomedicine is located, and where lectures and practical classes are held, have been installed in Russian medical institutions. At the same time, there is an acute shortage of specialists who would be able to use all their capabilities in their work.

siberianhusky
6 August 2020, 15:04 GMT9
000000
This is phenomenal-- a far reaching global achievement. Congrats Russia! I be so super proud of Russia, you'd swear I'm Russian myself!