A senior aide to the ousted crown prince of Saudi Arabia has alleged in a lawsuit filed in a US court that the present crown prince, Mohammed bin Salman, has tried to kill him. Saad al-Jabri claims bin Salman “dispatched a team of hunters and killers” to murder him just weeks after another Saudi exile, Jamal Khashoggi, was killed in Istanbul.

The New York Times once quoted an expert as saying Jabri knew “where the bodies are buried” in Saudi Arabia, and in his new lawsuit filed in the US District Court for the District of Columbia on Thursday, Jabri claims this is why bin Salman wants him dead.

Before being fired in 2015, Jabri worked for many years as a senior aide in the Saudi Interior Ministry, which was headed by former Crown Prince Mohammed bin Nayef. He left the country in May 2017, just a month before bin Nayef was ousted by bin Salman, and has remained in Canada ever since.

Jabri claims bin Salman has tried to kill him in three different ways: by luring him back to Saudi Arabia through actions such as arresting his children, as happened in March; hunting Jabri down in North America; and sending an actual hit squad to kill him.

Jabri’s lawyers also describe in detail the attempted assassination of Jabri, which they say happened just weeks after Khashoggi, a dissident supporter of the Muslim Brotherhood and critic of bin Salman’s rule who was a columnist for the Washington Post, was killed in the Saudi consulate in Istanbul. The Saud family has denied foreknowledge of the hit, claiming it was carried out by rogues, but Jabri says bin Salman sent members of the same hit squad, which he calls “Tiger Squad,” after him, too.

“Carrying two bags of forensic tools, and complete with forensic personnel experienced with the clean-up of crime scenes - including an instructor in the exact same criminal evidence department as the forensic specialist who dismembered Khashoggi with a bone saw - the Tiger Squad Defendants attempted to enter Canada covertly, traveling on tourist visas and seeking to avert the detection of Canadian border security by entering through separate kiosks,” the lawsuit states.

“Upon approaching the kiosks, the Tiger Squad Defendants aroused the suspicion of Canadian border security officials, who asked them whether they knew each other. They lied and said they did not. On information and belief, shortly thereafter, during secondary screening, Canadian officials found a photo of some of the Tiger Squad Defendants together, revealing their lie and thwarting their mission,” it continues.

However, Jabri’s suit is scant on the details, basing many of his claims on a series of text messages allegedly sent by bin Salman via WhatsApp on September 10, 2017. 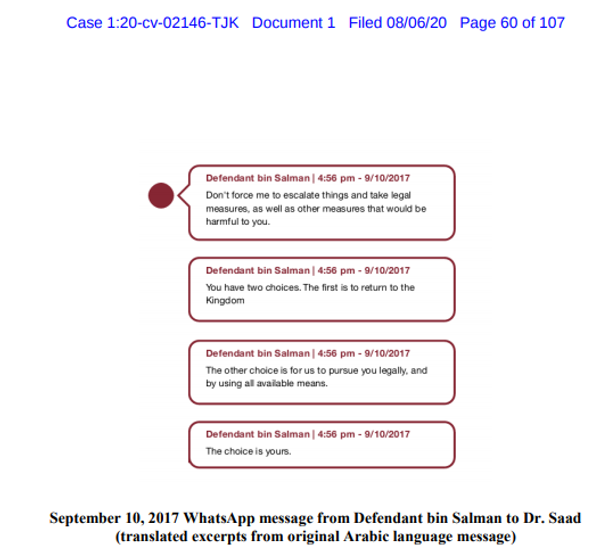 “Don’t force me to escalate things and take legal measures, as well as other measures that would be harmful to you,” bin Salman says in one message translated from Arabic into English and included in the suit. “You have two choices. The first is to return to the kingdom. The other choice is for us to pursue you legally and by using all available means. The choice is yours.”

According to the New York Times, Canadian officials have never spoken publicly about the events described by Jabri, and a spokesperson for the Saudi embassy in Washington did not respond to the outlet’s requests for comment.

Riyadh has pressed the Canadian government in recent months to end Jabri’s sanctuary and extradite him to Saudi Arabia. The Toronto-based Globe and Mail reported recently that in late 2017, the Saudi government attempted to flag Jabri with a “red notice,” which is used for wanted persons but is not an arrest warrant, via Interpol.

The following day, the Wall Street Journal reported that Jabri was wanted for alleged embezzlement and misuse of funds while serving in the Saudi Interior Ministry.

“We have exhausted every single avenue for a peaceful remedy and reconciliation, to no avail,” Dr. Khalid al-Jabri, Saad al-Jabri’s son, told the New York Times on Thursday. “We hope that this will help end the torment that my family is suffering. We have always told the Saudis, if you have an issue, bring it to court, so now we are making it easier for them by coming to court.”