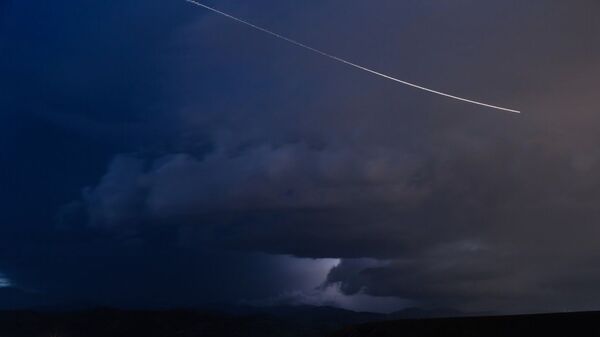 CC0 / /
Subscribe
Lilia Dergacheva
All materialsWrite to the author
Scientists have looked deeper into the core of early meteors, so-called IIE irons, and come to believe that their structure may correspond to the build up of early planetesimals or bodies of the early Solar System.

The early Solar System is believed to have consisted of so-called planetesimals - objects formed from dust, rock, and other materials, and scientists have now assumed that one family of universally known meteorites could actually be fragments of those solid objects found somewhere in protoplanetary and debris disks, per a study published in the journal Science Advances.

The new research shows that this one class of meteorites must have all stemmed from the same parent body, which was arguably both melted, and a pile of rubble. The frequently used scheme of classifying meteorites assumes that a single parent body can't be the source of both melted (chondritic) and unmelted (achondritic) meteorites. Yet, the new study has indicated that there might have been more diversity in planetesimals than we first thought. Researchers believe that the parent body of a rare group of meteorites found on Earth must have been differentiated, containing both melted and unmelted layers.

It was also found to have had a liquid metallic core capable of producing a powerful magnetic field, which it actually did.

"This is one example of a planetesimal that must have had melted and unmelted layers. It encourages searches for more evidence of composite planetary structures", lead author Clara Maurel, a graduate student at MIT's Department of Earth, Atmospheric, and Planetary Sciences (EAPS), explained in a press release. She added that looking into the full spectrum of structures, from non-melted to fully melted, “is key to deciphering how planetesimals formed in the early solar system".

The said parent body also shows that our understanding of such structures as planetesimals, from several metres to hundreds of kilometres in size,  and their formation, is not comprehensive and should be updated. According to recent research, planetesimals may have taken upwards of 1 million years to form, and these results back this up.

Per the authors, in that time period, "this could have resulted in partially differentiated internal structures, with individual bodies containing iron cores, achondritic silicate mantles, and chondritic crusts".

Separately, the researchers managed to stumble upon meteorites that would be a visual demonstration of that process, so-dubbed IIE irons, oddball bodies from about 4.5 billion years ago.

The team believes that these planetesimals formed fairly early on and rather quickly, in less than a few million years. If they formed fairly early, they would've contained radiogenic elements that generate heat as they decay to more stable elements.

Early in the Solar System's history there were more radiogenic elements, and the heat from all that decay could've melted the entire planetesimal. Planetesimals that formed later on would have had less radiogenic material, and wouldn't have melted. As for those between those two extremes - intermediate planetesimals - not much evidence has been found about them.

“They [IIE irons] show both evidence of being from primordial objects that never melted, and also evidence for coming from a body that's completely or at least substantially melted. We haven't known where to put them, and that's what made us zero in on them", shared co-author Benjamin Weiss, a professor at EAPS.

Mixed or intermediate planetesimals, with both molten and solid components, would've taken a longer time to form - several million years, according to lead author Maurel, which is much longer than existing models indicate.

The researchers’ analysis raised another question: where in the parent body did these meteorites form?

After more work and a string of simulations, it appeared that if a parent body with a molten core collided with another object, material could possibly be dislodged from the core and end up pretty close to the surface, where the meteorites are believed to have originated from.