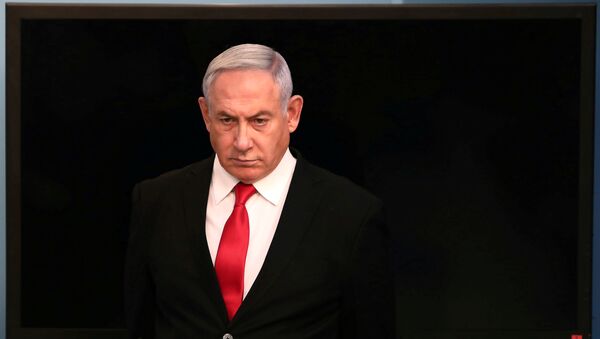 © REUTERS / POOL New
Subscribe
The incident comes as public anger has been growing against the prime minister, with people demanding his resignation over his indictment on corruption charges earlier this year.

A police officer visited a private citizen in Israel earlier this week to ask him to remove a photo of Prime Minister Benjamin Netanyahu from his Facebook page.

Sagi Haber, a resident of Givatayim, uploaded a genuine photo, which dates back to some 30 years ago, in which Mr Netanyahu appears to be making a Nazi salute. Haber captioned the post with the words "A brand for idiots". He did not make any allusions to Nazism in his post, according to The Times of Israel.

After he uploaded the photo, a commentator told Haber he had complained to police about the post. An hour later, a police officer arrived and said that Haber had committed a criminal offence by inciting against the prime minister.

Haber agreed to remove the post in fear of arrest but told the media that he was shocked by the incident.

"Since when do police send officers to people who upload posts or photos? It’s crazy," he said, as quoted by The Times of Israel.

The incident has been widely discussed online, with commentators sharing their bewilderment at the situation and describing it as an example of police overreach.

​This incident happened amid continuing rallies outside Netanyahu's residence in Jerusalem, with people demanding his resignation over his indictment on corruption charges. The prime minister's critics were recently joined by protesters who are not satisfied with the way the Israeli government has been responding to the coronavirus outbreak.