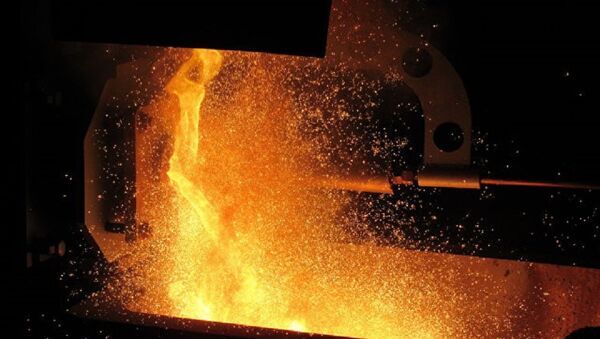 The US, Australia and the EU are working on a supply chain of rare earth metals independent of China. To date, Beijing controls the majority of the rare-earth minerals extraction and processing market. Using economies of scale, China can keep prices low, so it is extremely difficult for new players to enter this industry.

According to the Financial Times, Beijing's statements about possible sanctions against Lockheed Martin are fueling Western concerns that China may limit the supply of rare earth elements needed to produce not only electronics but also strategically important military equipment. China has already announced sanctions against the American military equipment manufacturer in response to the US decision to sell $620 million worth of weapons to Taiwan.

Western media, including Bloomberg, called these sanctions rather symbolic since the activities of Lockheed Martin have little to do with China. Asian countries account for only 9.7% of the company's revenue, with Japan, South Korea and Singapore being its main Asian markets.

The Chinese side has not officially revealed the exact sanctions against Lockheed Martin. However, according to China's Global Times, China may ban the supply of rare earth metals. In addition, China may also limit the cooperation of Lockheed Martin with suppliers of intermediate components and parts from China.

Rare earth minerals are the most important element for the production of high-tech electronics and other products around the world. On the one hand, the share of this raw material in the output of any single product is quite small. However, they are essential in the production of smartphone screens, motherboards and other high-tech electronics. Even the military-industrial complex depends on the supply of these metals: fuselages of combat aircraft, for example, are made of rare earth alloys.

Until the early 1990s, the bulk of the world's rare earth metals were extracted at the Mountain Pass deposit in the USA. But later it turned out that the world's largest deposits of this rare resource are in China. As a result, the country has become the main producer and supplier of rare earth metals in the world – China now accounts for 95% of all world supplies.

The European Commission is developing a new raw materials strategy, particularly aimed at reducing the dependence of European industry on raw materials from China, including rare earth metals. In November, Australia and the US signed a cooperation agreement between the two countries' geological services to ensure the extraction and supply of crucial minerals bypassing China. The choice of Australia as a partner is not accidental - Canberra is the second largest supplier of rare earth minerals after Beijing. However, substituting China as the main supplier will not be easy, Mei Xinyu, a researcher at the Centre for International Trade and Economic Cooperation at China’s Ministry of Commerce, said.

“This is the internal affairs of the US, Australia and other countries if they want to create a supply chain of rare earth metals independent of China. China will not interfere with these activities. However, from an economic standpoint, it is clear that these countries will have to subsidise their losses. And they will also have to invest a lot of money in facilities separating and processing rare-earth metals”, he said.

Mei Xinyu stressed that this is a complex technology that China has been developing since the 1970s. So even if the US, Australia and other countries can establish a new supply chain, their costs would be higher to those of China. Since these industries can only exist through subsidies, there is a high risk of corruption in this sector, the expert further noted.

China is unlikely to use rare earth metals as leverage against its geopolitical rivals. It is much more important for China to retain its status as a reliable supplier, Mei Xinyu said.

“I think China will not show any faintness of heart and use rare earth metals as an instrument of pressure to achieve its geopolitical goals”.

First of all, this is not such a big market, there are not many rare-earth metals, so the desired effect will not be achieved, unless, of course, there is a full-scale war, Mei Xinyu noted.

“China is well known to have never pursued its political goals through restrictions on rare earth metals”.

On the other hand, the US repeatedly imposed embargoes and sanctions against other countries. If the US wants to live in harmony with China, why even think about it, the expert wondered?

“Ultimately, China is cherishing its status as a reliable supplier and will not use supply bans as sanctions – something the US likes to do”, Mei Xinyu concluded.

The US believes that China will act in the same manner as Washington - using its possession of some valuable resource or technology as a leverage. However, if China used rare-earth metals as a bargaining chip, it would harm China itself and damage its international image. And China could quickly lose its position in the world market. After all, there are deposits of rare-earth metals not only in China but also in Australia, Mongolia, Japan, and the United States.

Will US Be Able to Gain Independence From China in Rare Earth Metals?
As a matter of fact, this was the case when China imposed restrictive quotas on rare-earth metal exports. At that time, Beijing stated that this had been done for environmental reasons to reduce the rate of pollution. But regardless of Beijing's motives, the result was that China's share in the global supply of rare-earth metals was seriously reduced. Therefore, the Chinese authorities cancelled the quotas in 2016.

Beijing is now probably looking to increase its presence on world markets, including rare earth metals. At the end of last year, China expanded its rare-earth metal quotas by 10% to a record 132,000 tonnes. China is interested in increasing the extraction and processing of these rare raw materials, as the bulk of technological electronics, where rare earth metals are used, are also produced in China.