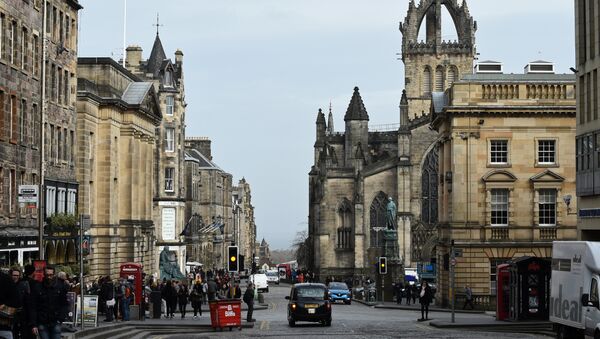 The Scottish government is looking to introduce a new member's bill that would incorporate the European Charter of Local Self-Government into Scots law.

If successful, the charter will set out 10 principles to protect the basic powers of local authorities, keeping Scotland closely linked with the EU, and in turn making it easier for Scots to join the bloc if independence is achieved.

Leader of UKIP Scotland Donald MacKay has shared his views on the matter in this interview.

Sputnik: How successful will this attempt from Sturgeon and the SNP be in keeping Scotland linked with the EU with the hope to re-join in the future?

Donald MacKay: Well, I would like to think it will fail, but I would suspect that it will be successful. The European Charter of Local Self-Government, the private member's bill may well get through; the question is fundamentally about whether or not the Scottish parliament should exist in the first place, and that's why as long as it does exist within the United Kingdom, then the SNP and Sturgeon will use whatever they can to wreck the United Kingdom and wreck Brexit, which is why UKIP's policy for the forthcoming Scottish parliamentary elections is to abolish the parliament.

We don't believe that decisions made for a country that's part of the United Kingdom should be made anywhere other than the House of Commons. We regard the Scottish parliament as an institution which is currently governed by people who want to destroy the United Kingdom and every step they take is designed with that end in prospect. The Unionist community in Scotland are badly divided and at the moment it looks as if any moves that the SNP make will achieve the objective that they're seeking to get to. So, I'm uneasy about it, but that's why I firmly believe we need to put the Scottish parliament in the dustbin.

Sputnik: What problems will this desire to remain in the EU from the first minister create for Scotland, particularly as some politicians in the SNP party, such as Joanna Cherry, want to instead get Brexit done and make preparations ahead on January 2021?

Donald MacKay: There's two ways of looking at it. First of all, you have to remember the people who run the so-called "Scottish government", and I don't recognise the term Scottish government, are people who have absolutely no understanding of any kind of the business community. I haven't read anywhere where it clarifies, for example, their issues towards fishing and all the agriculture and all usual areas.

I would have thought it was a great thing for Scotland to have control of its own fishing waters and I would have thought that would have appealed to the nationalist conscience, but it would appear not. The effect is that Scotland cannot do anything different from the United Kingdom unless it leaves the United Kingdom, which is why this is really more about trying to achieve independence than it is to stay within the EU; but were they to succeed, I think the consequences would be severe. I think the consequences are severe anyway, because an independent Scotland is economically not sustainable.

So, I would think that hypothetically any attempt to remain for Scotland, to remain allied or linked to the EU in whatever way, shape or form would be disadvantageous to the business community, in particular, to industry, commerce, manufacturing, but these people who make those decisions have no understanding of that because none of them have ever worked in a business they can figure it out.

Sputnik: What complications could arise regarding a second Scottish independence referendum if Scotland was to stay in the EU and moreover how likely is the prospect of a second independence vote?

'We are the UK of Great Britain and N Ireland… That Includes Scotland,' Commentator Says on Brexit
Donald MacKay: I don't think the SNP or Sturgeon really want a second referendum, deep down I don’t think they do, because if they lose it, then they've lost everything. If they win it, then the argument will be "well, we need independence three". I would hope that the Unionist community, if they've got any sense – and I would include myself as part of that – would be focusing on the fact that any independence referendum is about Sturgeon personally and that if they vote against it, they get rid of Sturgeon and that in itself I think would be an incentive for people to vote against separation.

I mean, the SNP have made a lifetime, and they've done very well to be fair, of moaning and groaning and playing the victim card. Deep down, if Scotland was ever to become independent, the consequences would be severe, I think economically, and all of a sudden, they've got nobody else to complain about. So, it's a nice comfortable position to be in to remain within the United Kingdom, and to just constantly complain about how badly you're treated - whether or not that's true or otherwise is really beside the point.

If Scotland were to leave the United Kingdom and remain within the EU, I think there would be a lot of businesses shutting shop. As I said, to repeat, don't think they really want a referendum. I think they want to pretend they want a referendum. Maybe I'm a veteran of too many episodes of Yes, Minister! but the fact that people say they want something doesn't mean they do. You very often make it look as if you're trying to achieve something that you're not trying to achieve and the SNP play that game very, very well.