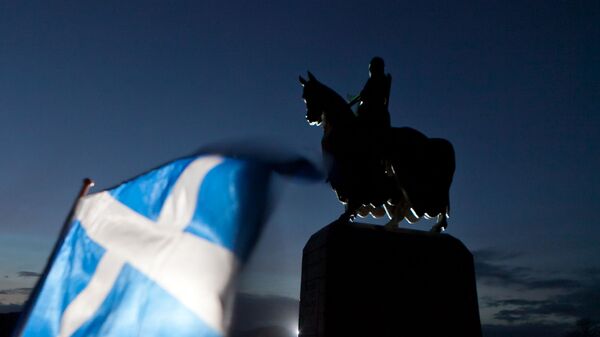 Scotland’s government has threatened to defy Westminster’s attempt to unilaterally control food and environmental standards post-Brexit, setting the stage for the biggest constitutional stand-off between London and Edinburgh, since the 2016 EU referendum.

With more on this story, Sputnik spoke to the Political Commentator Michael Swadling from the Croydon Constitutionalists, in this interview.

Sputnik: What do these actions from Scotland's First Minister and SNP government represent?

Michael Swadling: It's really another set of posturing. It's a great opportunity for Nicola Sturgeon to say, we're different, we want to be different, we should be independent and you can understand with her worldview and the purpose of a party why she wants to do that. It doesn't necessarily make it very credible. Ultimately, Britain is a united nation. There was a referendum, independence lost that and they voted to be part of the UK and part of that is in international treaties, Scotland is with the rest of the UK.

Sputnik: How successful will this attempt from the Holyrood government be? If Westminster was taken to court would the Scottish government have a case or would it instead be thrown out?

Michael Swadling: We saw in Brexit that you don't need to have a case for activist judges to decide to make up their own rules. The Supreme Court seems to do that on quite a regular basis. Judges in Scotland and judges in England can look at the same rules and interpret them differently.

I don't think, unfortunately, we really have a judicial system that's apolitical anymore and there are many judges who will grab the headlines given the opportunity. Fundamentally, though, Boris has an 80-seat majority and every decision can always come back to parliamentary sovereignty and the chance for Boris to bring in or change and pass any law he needs to.

Now I don't believe, to my understanding of the law as it stands today that new laws would be needed if the judge has interpreted the laws correctly. I'm not necessarily convinced they will.

Ultimately though we are the United Kingdom of Great Britain and Northern Ireland, that includes Scotland and as much as the SNP whine or like that fact they really do have to accept it.

Sputnik: With the Holyrood elections coming up in May 2021, what effect will these actions from Edinburgh and London likely have on the prospect of a future 2nd Scottish independence referendum? Could this actually hamper Sturgeon’s quest for a Scottish Independence?

Michael Swadling: I'm not sure it will hamper it. I think that the people of Scotland quite like the SNP and they want some deep heavy devolution and lots of Scottish matters dealt with in Scotland but then also I want to stay part of the United Kingdom.

Campaigners Raise Concerns Over Future of EU Citizens in UK After Brexit, Reports Say
That's what we've seen from the referendum. That's what we think through subsequent elections and I think that's a perfectly reasonable view to take. My own personal view is that much more government everywhere in the United Kingdom should be devolved and local people should have real responsibility but also consequences for local actions.

The real issue in Scotland, I see is that the government is responsible for what happens in Scotland, but not accountable for raising the taxes for it. Maybe if they were you would actually see them take a bit more of a measured approach to things.

The real consequences of this? I suspect it will just harden both sides, those pro-independents and anti-independents because it's all seen as part of the theatre of politics, rather than actually doing something for Scotland and that's really the problem with the SNP.

They are partaking in the theatre of politics all of the time. I'm not really sure I can pinpoint anything they've actually done for Scotland, and sooner or later, the people of Scotland through the Holyrood elections will reflect that fact and I'm sure that will be a bad time for the SNP.