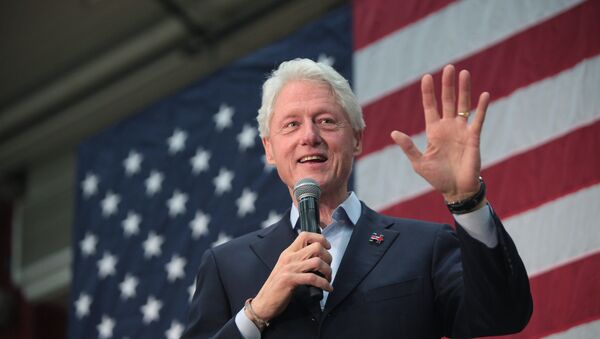 Oleg Burunov
All materialsWrite to the author
In July 1995, more than 8,000 Muslim men and boys were killed in Srebrenica after the city was taken by units of the Army of Republika Srpska. The International Criminal Tribunal for the former Yugoslavia and the International Court of Justice have classified the massacre in Srebrenica as genocide.

The Guardian has cited declassified documents as revealing that then-US President Bill Clinton tried to coax the Muslim-led government of Bosnia and Herzegovina into making territorial concessions to Bosnian Serbs after the Srebrenica massacre in July 1995.

The documents include Clinton's phone calls with foreign leaders at the time, during which the US president, in particular, blamed the Bosnian army for failing to defend Srebrenica.

"In Srebrenica there were about 3,000 Bosnian troops but they […] left without putting up a fight. I will talk to my military advisers, but they are very skeptical about bringing in forces with helicopters, especially if the Bosnians won't fight. We cannot defend democratic values in the abstract", he said.

Clinton was apparently not aware of the scale of the massacre, claiming in a conversation with then-UK Prime Minister John Major on 14 July 1995 that "the casualty rate has gone way down and central Bosnia is at peace because of contributions made by [the UN peacekeeping force] UNPROFOR".

According to the US president, the average American TV viewer "[…] thinks it's as bad or worse than it was in 1992; there's no telling them it's different".

EU Council Head Honours Srebrenica Victims
The documents revealed that the so-called "endgame strategy" on excluding the US from the Bosnian crisis was initiated by Clinton's national security adviser Anthony Lake in the weeks before the Srebrenica massacre.

The strategy stipulated forcing a peace deal to divide the territory of Bosnia and Herzegovina on a roughly even basis. In the event of the deal's collapse, the plan envisaged withdrawing UNPROFOR, lifting the arms embargo on Bosnia, and providing its Muslim-Croat Federation with support in the form of air strikes.

The goal was to help the federation become strong enough to fight the Serbs on its own, which in turn stipulated the Bosnians making a whole array of concessions related to territorial integrity.

Under the first annex to the endgame strategy, the key task was to conduct "a heart-to-heart talk with the Bosnians" to make them understand that in the wake of the Srebrenica killings, "they need [to] think more realistically about the shape of a settlement". 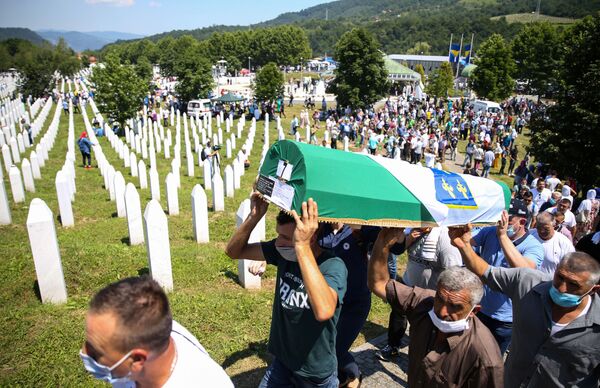 Men carry a coffin at a graveyard during a mass funeral in Potocari near Srebrenica, Bosnia and Herzegovina July 11, 2020
© REUTERS / Dado Ruvic

The US would consider "pressing the Bosnians to agree that the Serbs can conduct a referendum on secession after 2-3 years. If the Bosnians cannot persuade the Serb population that their best future lies in reintegration, there is no point blocking the peaceful separation of the Union along the lines of the Czechoslovak model", according to the annex titled "gameplan for a diplomatic breakthrough in 1995".

Some members of the then-US administration, including David Scheffer, an adviser to the American ambassador to the UN Madeleine Albright, expressed concern over what Scheffer described as "a very slippery slope".

"The Serbs have seized enormous territory through ethnic cleansing, and then we hold a 'democratic' referendum to confirm such aggression? A very transparent act of appeasement", he noted at the time.

The "gameplan", however, was never implemented, with a Croatian offensive against the Serbs in western Bosnia in August 1995 forcing them to sit at the negotiating table without demanding the promise of a referendum.

The massacre in Srebrenica, a town in western Bosnia close to the Serbian border, was staged by the Bosnian Serb army in July 1995 and left more than 8,000 Muslim men and boys dead. It is considered the biggest mass murder in Europe since the end of World War II.

The International Criminal Tribunal for the former Yugoslavia and the International Court of Justice have classified the massacre in Srebrenica as genocide. Bosnian Serbs as well as Serbia do not deny the killings took place, but dispute the acts were genocide.

000000
Popular comments
The "8000 men and boys" were a Jihadi terrorist guerrilla that terrorised Serbians for some time. Attacks that were not reported in the news and killings that nobody bothered about.

kernel.panic999
27 July 2020, 08:45 GMT6
000000
If we believe certain Bosnian muslims, Bill Clinton helped to plan the faux massacre of Srebrenica & now these documents show he wanted to ''appease'' the Bosnian Serbs, after ofcourse bombing them & helping both the Croats & Bosnian Muslims there militarily. I will take this news of these documents with a grain of salt.