Don’t Embarrass Me in Front of Humans: Video of Public Couple Fight Between Lions Goes Viral 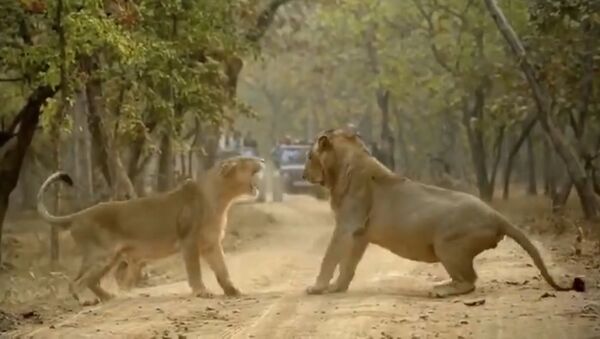 © Photo : Wild India/ Twitter
Subscribe
International
India
Africa
New Delhi (Sputnik): Gir National Park in the Indian state of Gujarat is the only natural habitat for Asiatic lions. On several occasions, the king of the jungle has been seen venturing into villages nearby, with people capturing them on cameras.

In a wildlife video comparable to a husband-wife argument, a lion and a lioness in India’s Gir Forest have been caught on camera fighting each other. The footage has taken the Internet by storm.

The video shows the lion and a lioness trying to overpower each other with mighty roars, but without inflicting meaning much harm.

He is like, don't embarrass me in front of all these people.

Plot twist: the lioness kept roaring for 8 hours straight once the camera subsided.

It was your turn to do the cooking... No I signed up only for washing the dishes