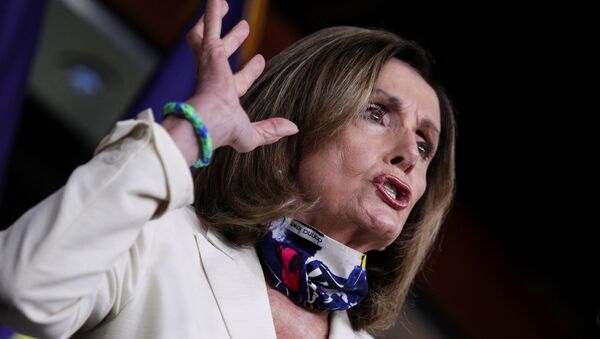 Pelosi has previously called out Donald Trump for not wearing a face mask in public and not supporting a nationwide mandate on masks. Trump is now calling on Americans to wear masks, but the top House Democrat insists the president's change of heart has come too late.

House Speaker Nancy Pelosi has branded the coronavirus the “Trump virus” in a fresh round of her war of words with the US president.

“He recognised the mistakes he has made by now embracing mask-wearing and the recognition this is not a hoax, it is a pandemic that has gotten worse before it will get better because of his inaction,” Pelosi told CNN in an interview on Tuesday. “And, in fact, clearly, it is the Trump virus.”

Donald Trump has for months referred to the coronavirus as “the China virus”, something Beijing described as an attempt to shift public attention from the shortcomings of his administration to a debate on the origins of the pandemic.

“If he had said months ago, let’s wear masks and let’s not – let’s socially distance instead of rallies and whatever they were, then more people would have followed his lead. He's the President of the United States. Instead of being a bad example, like a manhood thing not to wear a mask,” Pelosi said.

She added it was “clearly evident” that the administration’s response to the pandemic is to blame for the hundreds of thousands of coronavirus-related deaths in the United States.

Her remarks came after Donald Trump held the first White House coronavirus task force briefing since April. The president revived the briefings this week as the nation continues to see a surge in new cases, particularly in the South and West.

At the event, Trump encouraged Americans to wear masks – a measure he called “patriotic” – and warned that the pandemic will probably “get worse before it gets better”.

Trump has publicly disparaged his Democratic rival, Joe Biden, for wearing a mask and was first seen in one just this month, despite the CDC recommending the use of masks as early as in April.

Pelosi, one of the main advocates of a national mandate on face masks, in June branded Trump “cowardly” for not wanting to wear face masks during the pandemic. The president has rejected a mandatory policy on mask wearing.

“In fact, the reason the Centers for Disease Control and Prevention (CDC) hasn’t made it mandatory is because they don't want to embarrass the president, or insult the president, whatever it is,” she claimed at the time.

Trump has been criticised by the Democrats for downplaying the severity of the outbreak at the early stage and contradicting health officials, like top medical advisor Anthony Fauci, over loosening coronavirus restrictions.

The US virus caseload has crept close to 4 million, with the death toll surpassing 142,000. This compares with around 617,000 deaths reported globally as of Wednesday. There were more than 1,000 fatalities confirmed in the US on Tuesday, for the first time since 2 June. At least 27 states have either put reopening on pause or imposed new restrictions.