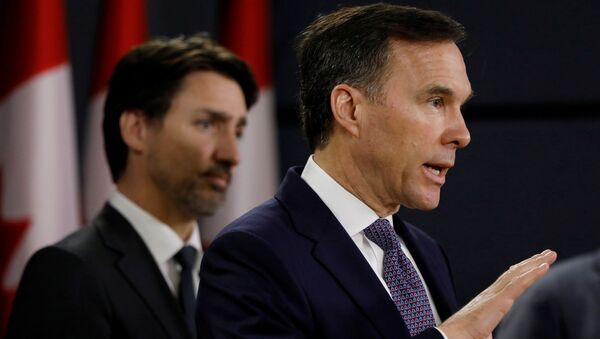 TORONTO (Sputnik) - Canadian opposition lawmakers said in a letter to the Commissioner of Lobbying of Canada Nancy Belanger that they are calling for an investigation into WE Charity’s efforts to lobby the government of Prime Minister Justin Trudeau.

“I am thus asking that you investigate whether anyone in the WE organization ought to have registered to lobby public office holders, but failed to do so, which would be an infraction under section 14(1) or any other unidentified sections of the lobbying act,” Conservative Pierre Poilievre, the shadow minister of finance, said in the letter on Friday.

The letter was co-signed by the Conservatives’ Shadow Minister for Ethics Michael Barrett.

The letter was sent after a senior government official’s testimony before the Standing Committee on Finance that the WE Charity approached “several officials and ministers” to deliver a proposed government-sponsored student volunteer program.

The letter said that one of the charity’s founders, Craig Kielburger, who the senior government official named as the liaison between the government and the organization, is not a registered lobbyist.

Trudeau and Finance Minister Bill Morneau have incurred heavy criticism after multiple investigative pieces revealed close ties between their families and the WE Charity, which was awarded a $670-million sole-source contract to administer a government-sponsored student volunteer program.

Minister of Diversity and Inclusion and Youth Bardish Chagger testified at the finance committee sitting that WE was set to receive as much as $32 million to deliver the program.

In addition, the Rebel News reported that WE Charity founders Craig and Marc Kleinberg have given donations to Trudeau and the Liberal Party of Canada.

Finally, the National Post reported on Wednesday that the WE Charity was asked by Trudeau and a government department to host a WE Day event during Canada Day weekend festivities in 2017 at a reported cost of $870,000 and where the prime minister’s mother, Margaret Trudeau, was a speaker and may have been paid speaking fees.

Last week, Barrett called for a police investigation into the relationship between the Canadian government and the WE to also uncover which other cabinet members knew of the alleged wrongdoing.

Both Trudeau and Morneau are now the subjects of a Conflict of Interest investigation by the Ethics Commissioner. The ethics probe is the third for both during their five years in office.