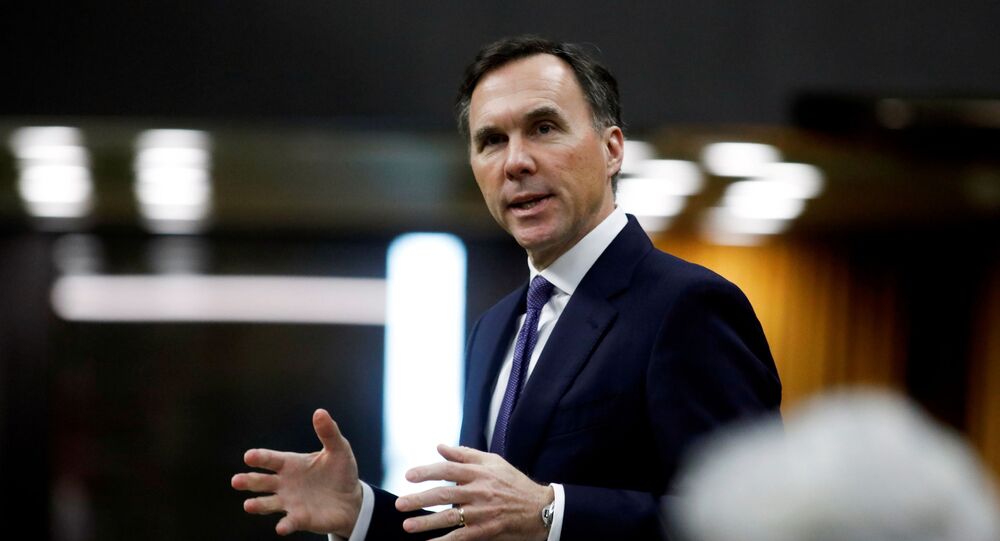 TORONTO (Sputnik) - A Canadian Member of Parliament, Charlie Angus, has requested an ethics investigation of Finance Minister Bill Morneau, the Office of the Conflict of Interest and Ethics Commissioner said in a statement to Sputnik.

The announcement comes after it was revealed that the minister did not recuse himself from a controversial decision to award a contract to a charity despite family ties to the organisation.

"We can confirm that Member of Parliament Charlie Angus has written to Conflict of Interest and Ethics Commissioner Mario Dion asking him to look into a potential conflict of interest relating to Finance Minister Bill Morneau", said office spokesperson Margot Booth on Friday.

Canada's Ethics Commissioner Mario Dion has already opened an investigation into whether any wrongdoing on the part of Prime Minister Justin Trudeau occurred in the decision to award a $670-million sole-source contract to the WE Charity to administer a government-sponsored student volunteer programme.

Angus said that Morneau violated a section of the Conflict of Interest Act by not recusing himself from the decision to award the contract despite having one daughter currently working for the organisation and another having spoken at WE events.

Earlier in the day, the office of the minister said that Morneau's adopted daughter Grace Acan's employment at the charity has "absolutely no link with any work the charity has done with the Government of Canada". The office added that the minister's other daughter Clare Morneau was not compensated for her speaking engagements.

Trudeau, and now another member of his cabinet, have incurred backlash after multiple investigative pieces revealed close ties between government officials and their families and the charity.

An investigation by independent media outlet Canadaland revealed that Trudeau's mother Margaret Trudeau and brother Alexandre Trudeau were paid a combined $258,000 for speaking engagements at WE events. Trudeau's wife Sophie has also participated in a number of WE Charity events around the world.

Additionally, the Rebel News reported that WE Charity founders Craig and Marc Kleinberg have given donations to both Trudeau and the Liberal Party of Canada.

The revelations have prompted the official opposition party to call for a police investigation into the relationship between the Canadian government and the charity.

"It is very clear, that there is sufficient grounds for this matter to be investigated by the police", Conservative Michael Barrett told reporters on Friday, citing a section of the Criminal Code of Canada which deals with fraud at the government level.

Barrett said that an investigation has to also uncover which other cabinet members knew of the alleged wrongdoing.

The Conservatives have stopped short of explicitly calling for Trudeau to step aside until the Royal Canadian Mounted Police makes a determination whether to proceed with an investigation or not. Bloc Quebecois leader Yves-Francois Blanchet has called on Trudeau to step aside while the investigation is ongoing and deputise Deputy Prime Minister Chrystia Freeland to lead the government in the interim.

The investigation of Trudeau will be the third against him during his time in office. The prime minister was twice found in violation of conflict of interest rules for interfering in the corruption investigation of Canadian engineering giant SNC-Lavalin's dealings in Libya and improperly accepting gifts or "other advantages" when visiting the Aga Khan's private island.

Morneau was fined in 2017 by the ethics commissioner's office for failing to disclose private, non-commercial real estate in France, according to reports. And in 2018, the ethics watchdog cleared the finance minister of conflict of interest after introducing a pension bill, while his family still owned shares of the company that was to administrate the new legislation.