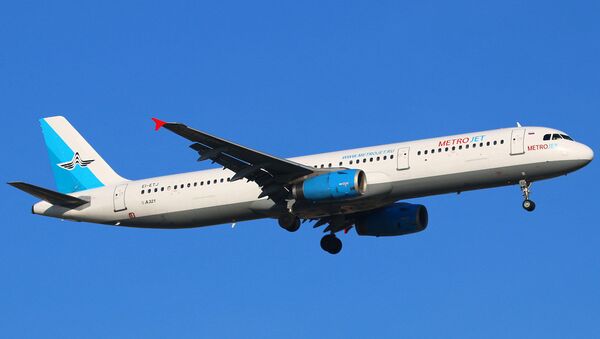 © Photo : http://samolety.org
Subscribe
International
India
Africa
A European-made Airbus A321 acquired by the US Army will be the latest commercial aircraft destroyed as part of the service’s “explosive vulnerability testing” at the Aberdeen Proving Grounds in Maryland.

Arkansas-based Aviation Repair Technologies was awarded a contract for exactly $1,757,500 US Army on Monday in exchange for an A321 aircraft, according to General Services Administration records.

Despite the nearly $2 million price tag, the European jet will not be used as a transport aircraft for troops - or even cargo.

In fact, the Army has just a single goal for the A321 in question: to make it explode.

While the Army supplied the July 13 award, it is the Directorate of Science and Technology that is tasked with handling the A321’s delivery to the Aberdeen Proving Grounds for the explosive testing.

The trials come as part of the US Department of Homeland Security’s (DHS) Commercial Aircraft Vulnerability and Mitigation Program, which seeks to identify possible vulnerabilities in commercial aircraft to “terrorist-based internal explosive threats” and identify “potential
countermeasures that can be employed to mitigate the potential for catastrophic structural or critical system failure as a result of in-flight detonation of those threats.”

The DHS highlighted that the data obtained from these commercial aircraft vulnerability tests is crucial to the country’s “development of explosive threat detection requirements and countermeasures.”

Furthermore, the trials can assist in the development and fitting of explosive-resistant materials on commercial aircraft.

“The data also strengthens the capability to respond to both existing and emerging terrorist-based threats to commercial aircraft targets, with potential application for other transportation and operational modes,” the DHS flier read.

Business Insider noted on Friday that the A321 is just the latest aircraft to undergo such testing. A Boeing 737, Airbus A320 and Airbus A300 have all met similar fates.