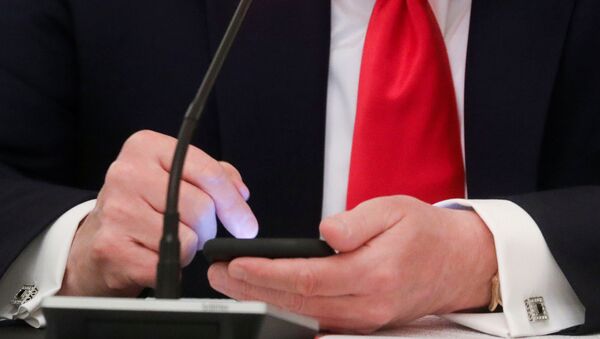 This comes in the wake of a massive hack attack on Twitter accounts of world-famous politicians, businessmen and celebrities, including Joe Biden, Barack Obama, Elon Musk and Kanye West.

US President Donald Trump will remain on Twitter, and his account was secure during the recent hacking attack, White House spokeswoman Kayleigh McEnany said on Thursday.

"The president will remain on Twitter. His account was secure and not jeopardized during these attacks," the press secretary said.

On Wednesday, Twitter saw a massive hack attack on the accounts of politicians and celebrities, among them Joe Biden, Barack Obama, Bill Gates, Kanye West and Elon Musk.

According to the company's statement, an investigation into the incident is underway. Meanwhile, Vice reported earlier in the day, citing sources in the hacker community allegedly responsible for the attack, that a Twitter employee had cooperated with the hackers in order to target blue-ticked accounts.