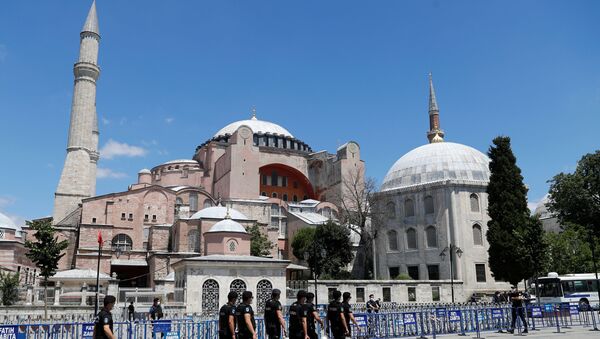 ANKARA (Sputnik) - The decision to convert Istanbul’s Hagia Sophia into a mosque is a step towards making Turkey great and the opinions of other countries do not matter, Turkish President Recep Tayyip Erdogan said on Saturday.

“We made a decision to change the status of the Hagia Sophia, based on the opinion of our people and not those who say things about us”, Erdogan stated during an appearance on Turkey’s NTV broadcaster.

During his television appearance, Erdogan added that the country will continue to “take the right path, in order to build a mighty and strong Turkey”.

The ruling to turn the site in Istanbul into a mosque has been met with firm resistance from many members of the international community. The Russian Orthodox Church has expressed its regret that Ankara ignored calls to preserve the site as a museum, and both Washington and Athens have also criticized the decision.

On Friday, Turkey's highest administrative court annulled a 1934 decree, which made the site into a museum. This decision means that the Hagia Sophia can now be used as a mosque, and a presidential decree was signed opening the site for Muslim prayers.