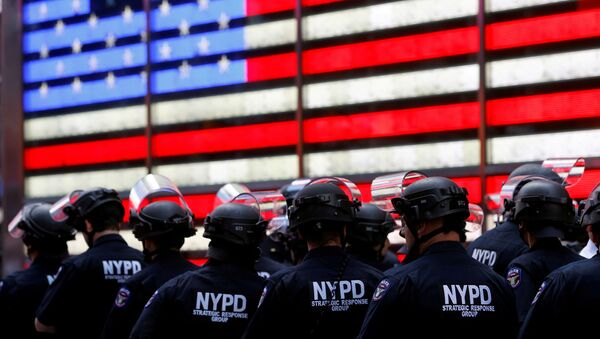 © REUTERS / Mike Segar
Subscribe
The techniques and weaponry at the core of US police militarization are pioneered abroad on the front lines of the US war machine and its client states, a laboratory where the line between protester and insurgent becomes blurred by a militarized, foreign occupation. At the center of this dynamic are Israel and Iraq.

Part 2, "Crafting the Warrior Cop: How US Police ‘Brought the War Home’ as a Paramilitary Force," can be found here.

Max Blumenthal, editor of The Grayzone and author of “Goliath: Life and Loathing in Greater Israel,” told Sputnik that for Israel and its lobbyists in Washington, the terrorist attacks on September 11, 2001, were a “massive marketing opportunity” that allowed Israel to “consolidate its image as the global teacher” of counterterrorism.

Israel has from its inception in 1948 appeared as an occupying force in Palestinian lands, where the difference between Israeli police and the soldiers of the Israel Defense Forces (IDF) is often indistinguishable and militant Palestinian resistance has never ceased. At the time of 9/11, however, Israel and the Occupied Palestinian Territories were embroiled in the second Palestinian mass uprising in a decade, and Zionist groups in the United States began funding trips for US police to Israel to see how Israel controlled crowds and waged street battles during the Second Intifada. 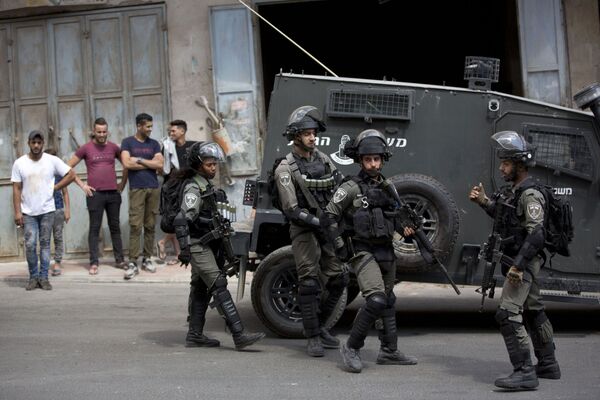 JINSA has sent more than 200 US police officers to Israel for training in addition to the 10,500 US police who attended 10 different conferences hosted in the US itself, as the “the architect of the US-Israel police exchange” himself, Steven L. Pomerantz, recently said in an article.

The ADL hosts the annual National Counter-Terrorism Seminar (NCTS) in Israel, which the group describes as “an intensive week long course led by senior commanders in the Israel National Police, experts from Israel’s intelligence and security services, and the Israel Defense Forces. More than 175 law enforcement executives have participated in 12 NCTS sessions since 2004, taking the lessons they learned in Israel back to the United States.”

A brochure advertising the trip notes that attendees receive training on such topics as “leadership in a time of terror” and “balancing the fight against crime and terrorism.” 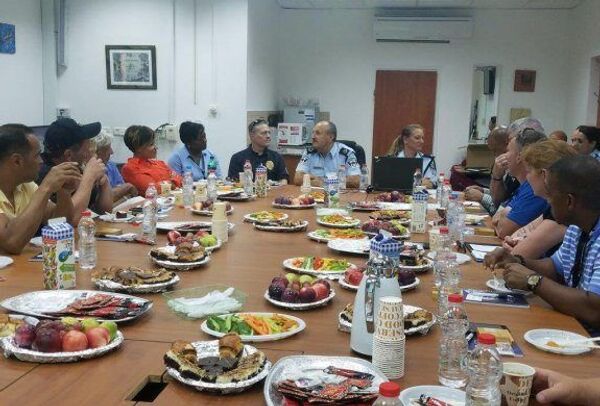 According to The Intercept, the ADL seminar includes meetings with Yasam, the elite tactical riot police commonly deployed to brutalize Palestinian protesters, and the Israeli intelligence bureau Shin Bet, as well as visits to checkpoints, prisons and tightly controlled areas of the West Bank, where Israeli police and military enforce the apartheid-like separation between Palestinian locals and the Jewish settlers whose new hamlets dot the ancient cities and countryside.

Blumenthal said the exchange programs “reinforced what was already common mainstream practice among US police - racial profiling,” providing new techniques such as looking for “micro-expressions” as an excuse to harass or detain basically anyone they wished.

He recalled that during the annual conference of the International Association of Chiefs of Police in Boston in 2006, then-head of Shin Bet Avi Dichter encouraged a crowd of 10,000 that included then-FBI Director Robert Mueller and then-US Attorney General Alberto Gonzales to blur the lines between “fighting criminals and fighting terrorists," dubbing them “crimiterrorists,” as they form “two sides of the same coin.”

In addition to the paramilitary attitude that any civilian is a potential terrorist insurgent, US police have brought numerous tactics and weapons back from their Israel trips for use against US civilians, such as the New York Police Department’s (NYPD) infamous Muslim surveillance program, which was modeled in part on Israeli surveillance of Palestinians in the West Bank.

Another is the chemical weapon “skunk water,” a noxious liquid sprayed from hoses that imparts a foul smell on anything it touches that will not disappear for days. Humans struck by skunk water can experience nausea, vomiting and skin rashes. While US police have not yet been reported using skunk water, some police forces have bought the substance, including the St. Louis police in the aftermath of the 2014 uprisings in nearby Ferguson, Missouri, that followed the police shooting of Michael Brown.

Tear gas in #Ferguson, tear gas in #Palestine. Both made by the same company: "Combined Tactical Systems." pic.twitter.com/Cq6OJDqpmL

Solidarity with #Ferguson. Remember to not touch your face when teargassed or put water on it. Instead use milk or coke!

​At least 12 states, plus the District of Columbia, have sent police to train in Israel, according to a report by Amnesty International, and thousands more have learned from seminars in the US featuring Israeli police. That includes the Minneapolis Police Department, which sent 100 officers to a 2012 “counter-terrorism” seminar hosted at the Israeli consulate in Chicago. As observers have pointed out, the knee-on-neck hold used by Minneapolis police to subdue - and eventually kill - George Floyd on May 25 is commonly used by Israeli police against Palestinians as well.

Crazy how the same thing happens in Palestine but the world chooses to ignore it pic.twitter.com/7wddf9tUYb

​However, the influence has also gone in the other direction, with Israel passing its own “stop and frisk” law in 2016, modeled after the NYPD’s highly discriminatory targeting of nonwhite people for invasive searches on the street. The law was rescinded two years later by Knesset members who fumed that Israeli police had misled them about the law’s intended use.

After the US invaded Iraq in 2003 and much of the old police force was disbanded, the new Iraqi government turned to elite commando units to form the backbone of its fight against Iraqi demonstrators and insurgents fighting the US occupation.

In September 2004, the Interior Ministry formed 5,000 officers into the first Police Commando Battalions. Assigned as the group’s principal US adviser was Col. James Steele, who had previously headed the US Military Advisory Group in El Salvador in the mid-1980s that facilitated US support of the military government waging its own brutal civil war against communist militant groups.

The commandos, along with many other Iraqi police units, received extensive training from private security contractors like US Investigations Services (USIS), but also from thousands of US police. US troops coordinated closely with Iraqi police as they engaged in joint operations against insurgents. According to the US Institute for Peace, the US spent $8 billion training Iraqi police, much of which was wasted, as the commando units proved highly corrupt. 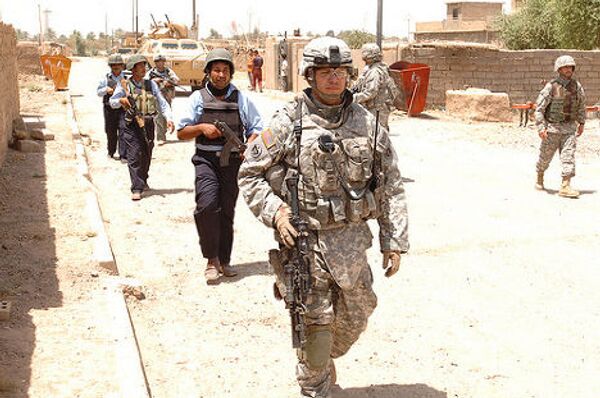 Iraqi police and US military
© Flickr / The U.S. Army

By the time of the Iraq War, the LAPD was so militarized that it began teaching the US Marines a few things about their new jobs as urban occupation forces.

In the Spring of 2004, LAPD detective and SWAT team member Ralph Morten toured the US Marine Corps (USMC) units stationed in the rebellious Anbar Province, teaching them about explosive ordnance disposal. A USMC bulletin at the time notes Morten was sent by LAPD Chief Bill Bratton, who helped popularize the so-called “broken windows policing” that fueled mass incarceration in the US.

USMC Gen. James Mattis, who oversaw the destruction of Fallujah in Anbar in 2004, recalled the LAPD had advised the Marines on their policing roles during a visit to Los Angeles.

“The LAPD was superb,” Mattis told a USMC historian in 2009. “We sat in classrooms with them. We spent the day with them. It was very, very helpful, and their counter-IED [improvised explosive device] guy basically helped train our people and then deployed with us. But the LAPD, based on a good working relationship, was most beneficial, from the chief down to the detective level.”

Another factor contributing to police militarization is the direct flow of military personnel into law enforcement. According to a study by the Marshall Project, 1 in 5 police officers is a military veteran, and policing is the third most common occupation for veterans, after truck driving and management.

Further, a 2017 study by the outlet focused on the Boston and Miami police departments found that cops who were military veterans had much higher rates of excessive use of force complaints, and a 2018 study by researchers at the University of Texas School of Public Health found that cops who were military veterans were nearly three times more likely to have fired their weapons while on duty than non-veterans.

A guidebook produced by the US Department of Justice’s Bureau of Justice Assistance (BJA) in 2009, titled “Employing Returning Combat Veterans as Law Enforcement Officers,” summarizes both the appeal and challenges of recruiting combat veterans into US police forces.

According to the report, 34% of veterans who became police officers had previously been military police or worked in security forces such as those responsible for training Iraqi police.

The BJA further notes that veterans who enter police service have problems such as “reduced level of empathy for others,” having an “us versus them” mentality, “low tolerance for citizens’ complaints” and various challenges with differentiating between the military combat environment they had previously occupied and the present civilian environment.

Combined training has further blurred the boundaries between tactics. One SWAT operator from Michigan recalled in 2011, just days after al-Qaeda leader and 9/11 mastermind Osama bin Laden was killed in Pakistan by US Navy SEALs, how the tactics they used had been learned from drilling with police.

“Those of us who have been in law enforcement and tactical training for the past two decades can remember when the military came to us to learn CQB [close-quarters battle] tactics,” former Michigan SWAT operator Sgt. Glenn French wrote in Police One. “As cops and soldiers trained together, we learned from each other. The military took our CQB tactics to war and developed some enhancements of their own.”

The Pentagon has played a key role in militarizing US police by providing a laboratory for militarized policing in overseas occupation wars, as well as the excess war materiel funneled to cops. However, it was US lawmakers who provided the laws, prisons and funding that pushed US police into a greater and greater role of maintaining social control. Black communities in rebellion drove the anxieties of white officers and politicians alike, who feared rebellions evolving into revolutions and created groups of armed men capable of blunting those movements - men schooled in the tactics and weaponry of those occupation wars, who saw the same dynamic at home.

000000
Popular comments
US is not an empire, but Just a bunch of corrupted terrorists.