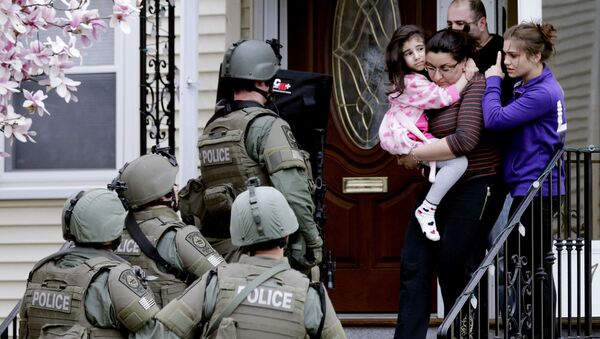 While the US Defense Logistics Agency and Department of Homeland Security have provided the essential mechanisms for placing military equipment in cops’ hands, they cannot be blamed for the internal culture cultivated in police departments for decades leading to them requesting such equipment and justifying it as necessary for their jobs.

Part 1, "Arming the Warrior Cop: How the 1033 Program Funnels Pentagon Weapons to US Police," can be found here.

The growth of a militaristic culture among US police is in large part in response to the mission at the core of their purpose: to maintain social order in a society deeply stratified along class and racial lines. The nationwide civil disobedience, protests and uprisings that drove the fight for Black civil rights forward in the 1950s and 1960s brought parallel calls for increasing the power of police to maintain order and fueled a police obsession with always absolutely outclassing any conceivable opponent in terms of firepower.

The “tough on crime” posturing that followed dominated US politics in the latter 20th century swelled the numbers and power of police, driving forward the War on Drugs and a vast expansion of prisons into a system of mass incarceration.

It was an arms race with a largely imaginary enemy, driven by anxieties about a handful of incidents. One of these was the 1965 uprising in Watts in southern Los Angeles, California, which led to the creation of the Los Angeles Police Department’s (LAPD) Special Weapons and Tactics (SWAT) team.

The Creation of SWAT

Although the first group called SWAT was a fast-acting bank robbery response team of the Philadelphia Police Department in 1964, it was the LAPD that pioneered SWAT as a team for taking on terrorists, barricaded shooters or snipers. However, its first deployment was the December 8, 1969, attack on the Black Panther Party’s Los Angeles headquarters, which was neither fortified nor holding hostages. 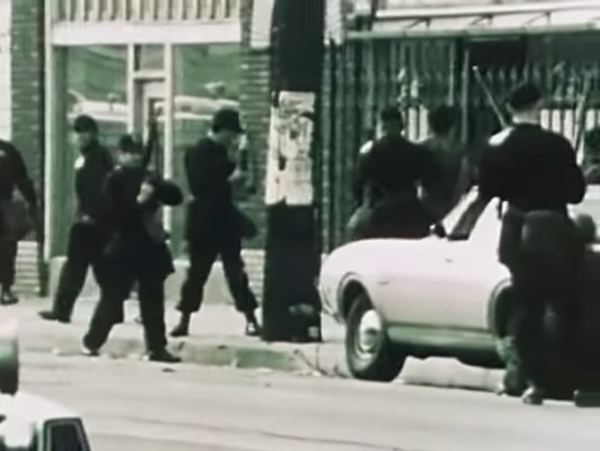 As the War on Drugs expanded, SWAT teams became the standard police unit assigned to carry out drug raids. They specialized in using heavy weapons, including automatics, and they drilled specially for the kind of team infiltration tactics used on urban battlefields. While they conducted just a couple hundred raids per year nationwide in the early 1970s, by 1996, SWAT teams were carrying out 30,000 drug raids per year, and they surpassed 40,000 in 2001. The American Civil Liberties Union (ACLU) estimated in 2014 there were 124 SWAT drug raids across the US every day.

Still, comparatively few police departments had such teams, which are expensive to arm and maintain. But in 1997 - the same year the 1033 Program began - the demand for police armed and trained like SWAT teams grew exponentially after two bank robbers totally outgunned dozens of regular LAPD officers.

‘Nothing We Have Can Stop Them’

During the 44-minute shootout between LAPD officers and bank robbers Larry Phillips Jr. and Emil Mătăsăreanu on February 28, 1997, the duo survived hit after hit from officers’ firearms, including a direct hit to Mătăsăreanu's chest by an officer’s AR-15 rifle. The hit merely winded Mătăsăreanu, thanks to 40 pounds of powerful body armor he was wearing, and officers only subdued the two by shooting their unprotected lower legs.

According to the Los Angeles Daily News, officers at first warned their colleagues over the radio not to attempt to stop the getaway vehicle, as “they've got automatic weapons, there's nothing we have that can stop them.” Before the two robbers were killed, they shot 1,100 rounds at the LAPD and wounded 20 officers. The tide of battle turned after the heavily armed and specially trained SWAT team arrived.

Bob Parker, a former SWAT commander for Nebraska’s Omaha Police Department, described in a 2012 article for Police Magazine the sea change “the 44 minutes in North Hollywood” brought about in his department, noting not just the issuance of stronger AR-15 rifles to patrol cops, but the kind of tactical training that would enable “shooting, moving, and communicating” during a shootout. “Street cops would be able to stand and fight on their own rather than waiting for SWAT,” Parker wrote.

However, just two years after the Los Angeles shootout, SWAT teams outside Columbine High School in Colorado sat idly by as two shooters murdered 12 students and a teacher, as the officers deemed the situation too dangerous to enter the building. While this situation, seemingly catered to the creation of SWAT teams, might have become an argument against their proliferation in another era, in the Drug War, tough-on-crime world of the 1990s, Columbine became a rallying cry for further police militarization.

In his 2013 book “Rise of the Warrior Cop: The Militarization of America’s Police Forces,”  journalist and author Radley Balko wrote that after North Hollywood, Columbine and the creation of LESO, “just about anyone running a police department who wanted a SWAT team could now afford to start and fund one.” Thanks to the 1033 program, by 2015, 90% of US cities with populations of more than 25,000 had SWAT teams, and even smaller hamlets did, too.

However, by 1997, the seed of police militarization had been growing in fertile soil for some 30 years, even beyond the development of SWAT teams.

Eugene Puryear, author of “Shackled and Chained: Mass Incarceration in Capitalist America,” told Sputnik the driving force behind modern police militarization was “the feeling and the idea amongst many ruling elites that ... things were slipping out of control in terms of society becoming ungovernable.”

President Lyndon B. Johnson’s 1968 Omnibus Crime Control and Safe Streets Act was signed while the embers of the nationwide conflagration that followed the April 1968 assassination of Dr. Martin Luther King Jr., and the Black uprisings in Watts as well as Detroit, Newark and other cities were still smoldering. The bill birthed the Law Enforcement Assistance Administration (LEAA), the first of several agencies formed to funnel federal funds to police forces across the nation. By the time the LEAA shut down in 1982, state and local police forces nationwide had received some $8 billion via the program.

According to Puryear, the LEAA was “predicated on the fact that ‘criminals’ and ‘radicals’ were better armed than the police, and the federal government had to start pumping money into police departments in order to help them get new, more militarized equipment.”

Johnson’s successor, Richard Nixon, ran on a platform of law and order and was responsible not only for implementing and fueling the LEAA, but for inaugurating what became the War on Drugs with the Comprehensive Drug Abuse Prevention and Control Act of 1970 and formation of the Drug Enforcement Administration (DEA) in 1973.

Puryear said the Nixon campaigns in 1968 and 1972 used a “modified Southern strategy approach” to win the presidency by “taking crime and trying to link it to political unrest … He had the best strategy, from the point of view of the ruling class, in order to address all of these various challenges, and one of the main ones was the Black revolt.”

“If the Black Panthers and groups like that are able to just wantonly broach the law and have all this revolutionary rhetoric and challenge the system, that encourages other people to break the law, so that this kind of Black insurgency that has both criminal and political elements all kind of mixed in with kind of racist fantasies of  Black criminality and the fear of Black predation on white people that’s put forward in white supremacy,” he said. 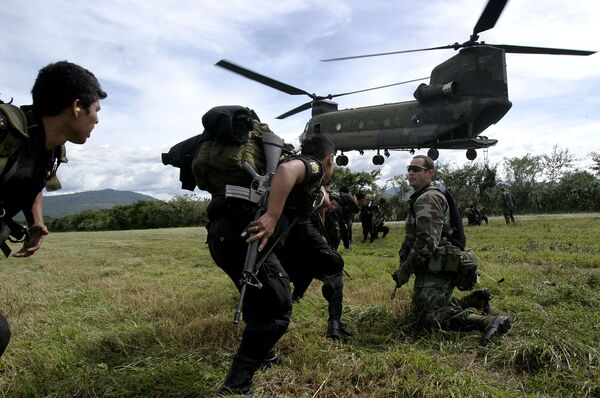 Puyryear said the DEA “is almost like a regular military. Its scope is worldwide, and they’re very embedded with military special forces-style policing,” noting a major driving force was the “generalized 1980s military building up of right-wing dictatorships against communism.”

“The DEA is becoming a more international agency in the ‘80s, the US is having this whole anti-drug thing, they’re shockingly trying to blame the drugs on Cuba and the communists when it’s obviously the right wing,” Puryear said. “The front of the War on Drugs ultimately becomes, in all of these countries, a smokescreen for war against left-wing, armed militants.”

Already a highly militarized federal police agency, the DEA operates its own SWAT teams, called Special Response Teams (SRT), the details of which are shrouded in secrecy. However, SRTs replaced the older Foreign-Deployed Advisory and Support Teams (FAST), which had received US Army training enabling them to conduct drug busts in Afghanistan, with the program later expanding to Latin America as well. After the inspectors general of the US Justice and State Departments eviscerated the program over the massacre of Honduran civilians in the eastern town of Ahuas in 2012 and the coverup that ensued, acting DEA Administrator Chuck Rosenberg disbanded the FAST groups in May 2017.

A classified DEA memo from 2004 obtained by the American Civil Liberties Union (ACLU), titled “The ‘Other’ Warfighter,” further shows how the DEA encourages a military culture, describing the War on Drugs as having “all the risks, excitement, and dangers of conventional warfare, and the stakes are equally high.”

‘This is Vietnam Here’

During the mass uprisings of the 1960s, US police and residents of the Black communities they patrolled developed similar views on the situation, diagnosing the conflict as one between occupying and liberatory forces. 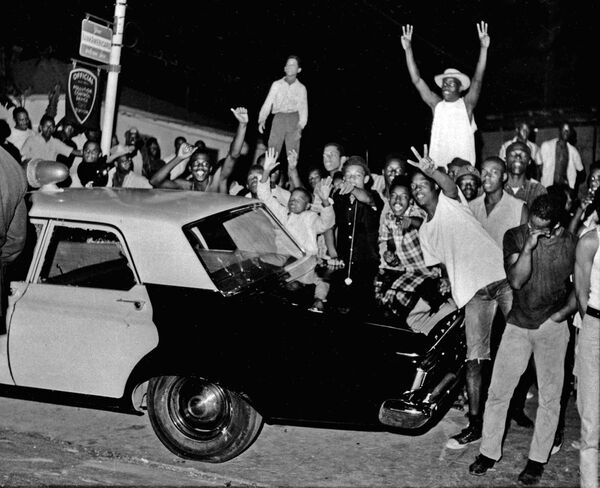 The famous Watts riots in Los Angeles in 1965
© AP Photo

Black Panther Party co-founder Huey Newton referred to the police as an “occupying army,” writing in 1969 that “there is great similarity between the occupying army in Southeast Asia and the occupation of our communities by the racist police. The armies are not there to protect the people of South Vietnam, but to brutalize and oppress them for the interests of the selfish imperial power.”

Hardly an exaggeration, it was a comparison the Los Angeles police drew themselves: during the Watts uprising in 1965, LAPD Chief Wiliam Parker described police actions as “very much like fighting the Viet Cong” and characterized the protests as “urban guerrilla warfare.”

Again, in 1989, the LA District Attorney’s Hardcore Gang Investigations Unit said of the LAPD’s street saturation strategy to fight gangs and drugs that “this is Vietnam here.” The LA Times’ Mike Davis also notes a southern California mayor who referred to gangsters at that time as “the Viet Cong abroad in our society.”

Part 3, "Training the Warrior Cop: US Empire is a Laboratory for Militarized Policing," can be found here.