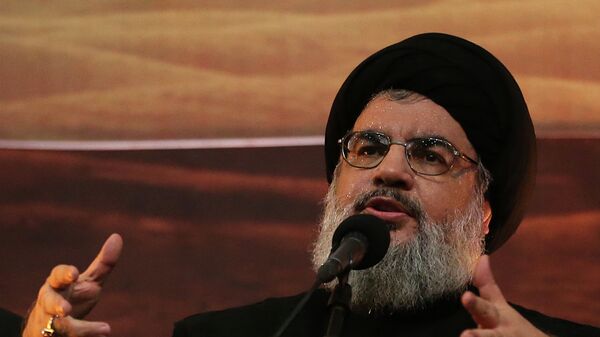 Ilya Tsukanov
All materialsWrite to the author
Previously, the Hezbollah chief called on the Lebanese political and militant movement to join forces with Hamas in Gaza to “confront” Israel’s “aggression against the Palestinian people” amid Tel Aviv’s plans to swallow up much of the West Bank.

Hezbollah leader Hassan Nasrallah stepped up his verbal attack on Israel on Tuesday evening, calling Tel Aviv’s plans to ‘apply sovereignty’ to parts of the West Bank and the Jordan Valley an “extremely dangerous” prospect for Lebanon, and warning that Hezbollah would not stand idly by if the Netanyahu government proceeded with its plans.

“Lebanon’s current crisis must not divert us from supporting the Palestinian cause especially now as the Zionist regime is planning to annex areas of the West Bank and Jordan Valley,” Nasrallah said in a speech broadcast by the pro-Hezbollah al-Manar TV channel on Tuesday.

“We support the Palestinian people and its leadership, and are ready to do anything to block and prevent the annexation plan,” he added, echoing remarks he made Monday in which he called on Hezbollah and Hamas to “unite ranks” to halt Tel Aviv’s “aggression”.

Israel Postpones Plan to Expand Sovereignty Over Parts of West Bank
Vowing to ‘apply sovereignty’ to as much as 30 percent of the occupied West Bank territories and making it a key plank of his campaign platform ahead of the March legislative elections, Israeli Prime Minister Benjamin Netanyahu has so far held off on the decision amid international pressure and suspected internal disagreements between Likud and its grand coalition partner Blue and White, led by Defence Minister Benny Gantz. On Monday, Foreign Minister Gabi Ashkenazi said moving forward with the plan is “not within the agenda for today or tomorrow”, and added that the Defence Ministry is still “weighing the risks in the field of security, as [the move] will have serious repercussions”.

‘US Meddling’ and Economic Crisis

“The US ambassador to Lebanon has been openly interfering in our internal affairs. The US meddling in Lebanon is rejected and the Lebanese state must move in this regard,” the Hezbollah chief said, accusing Washington of behaving like a “colonialist” and Shea of “acting like a governor” of an occupied territory.

“Every day she attacks…insults and offends us…She is pushing the Lebanese toward infighting, sedition and civil strife,” Nasrallah added.

Addressing Shea and other US officials directly, Nasrallah warned that “your policy in Lebanon won’t weaken Hezbollah but will strengthen it and that blockade on Lebanon is futile; my advice is to abandon this policy.”

The Hezbollah chief also called on Washington to refrain from giving “lectures” on human rights issues, “especially when your country is the greatest violator of human rights worldwide”.

“Your country has funded terrorism in the region,” Nasrallah claimed, apparently referring to alleged US support for Islamist militants whom Hezbollah forces have fought in Syria. 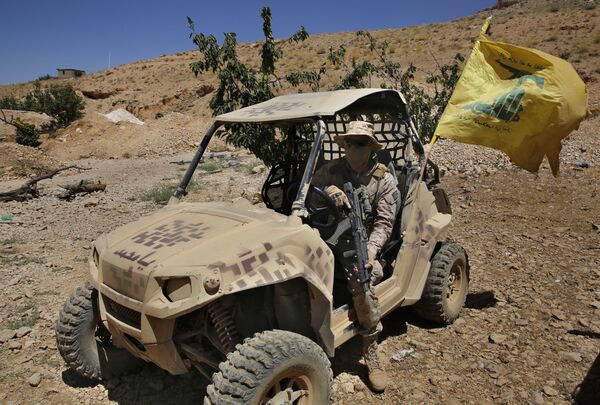 A Hezbollah fighters sits in a four-wheel motorcycle positioned at the site where clashes erupted between Hezbollah and al-Qaida-linked fighters in Wadi al-Kheil or al-Kheil Valley in the Lebanon-Syria border, Saturday, July 29, 2017
© AP Photo / Bilal Hussein

Last week, Shea expressed “great concerns” over Hezbollah’s role in Lebanese politics. Washington classifies Hezbollah as a terrorist group, and has previously slapped sanctions on the group and persons and entities it does business with. In May, the US Treasury added three persons and 12 entities, including pharmaceutical and medical companies, to its terror sanctions lists.

Move Away From the US, Toward Iran and China

Finally, commenting on Lebanon’s ongoing economic crisis, and the recent collapse of the country’s currency and part of its banking system, Nasrallah criticised the luxury goods, banking and tourism-focused economic model and the ‘bourgeoisie mentalities’ of elites, and called on Beirut to work toward becoming a self-sufficient agricultural power to lessen dependence on the US and others. He added that Lebanon should buy fuel from Iran, and welcome Chinese investment in the country. He praised Iran for its self-sufficiency.

“Iran eats what it plants. It has sophisticated facilities. In the Iranian model, fuel and everything else is produced in Iran…The main challenge is to prevent hunger; when we eat what we plant and wear what we sow, we will become a sovereign country,” Nasrallah concluded. 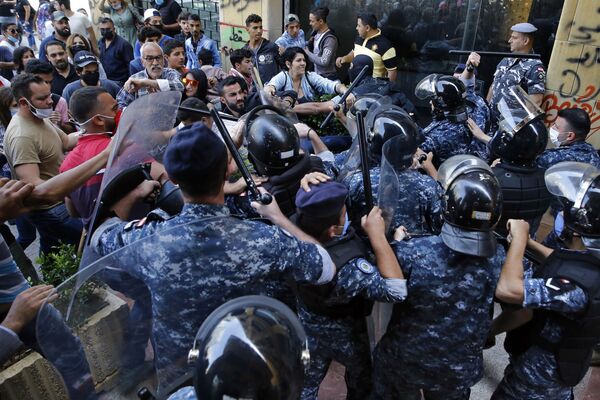 Anti-government protesters clash with riot police in front of the Ministry of Economy in downtown Beirut, Lebanon, Monday, May 11, 2020
© AP Photo / Bilal Hussein

Since its founding in 1985, Hezbollah has become a major force in Lebanese politics, and engaged in a string of deadly skirmishes with Israel, the most significant of them being the 34-day war in 2006. The conflict began after Hezbollah militants kidnapped two Israeli soldiers during a border conflict, with Israel responding with massed air and artillery strikes on targets throughout Lebanon and the institution of a naval blockade. Stopped by the UN, the war claimed the lives of 121 Israeli troops, 44 Israeli civilians, 250 Hezbollah fighters, 74 Lebanese troops and militiamen, and nearly 1,100 Lebanese civilians.