Dominic Cummings to Visit the UK's Most Classified Military Sites 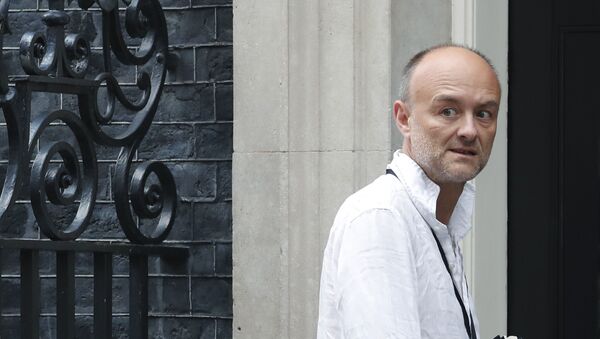 © AP Photo / Alastair Grant
Subscribe
Amid a pending review of the UK's armed forces, the Ministry of Defence has been warned that the chief advisor to Prime Minister Boris Johnson - Dominic Cummings - is looking to recondition the organisation.

Dominic Cummings is poised to visit SAS and four other sensitive military sites, a leaked Ministry of Defence (MoD) email revealed on Wednesday, as the Prime Ministers' top advisor seeks to overhaul the government body.

Boris Johnson's aide will be given a personal tour which will include visits to the Special Boat Service in Dorset, SAS headquarters in Herefordspecialist, and military research laboratories at Porton Down, Wiltshire, according to the email seen by the Sydney Morning Herald.

According to the documents, defence secretary Ben Wallace has prohibited officials from talking to the Prime Minister or Mr Cummings regarding the itinerary of the tour.

“The secretary of state explicitly does not wish anyone to engage Number 10 or Dominic Cummings on this,” the email said.

“It is for the [the minister’s special adviser] and the secretary of state to engage in the first instance before delegating to officials".

Mr Cummings has already been to MI5 and MI6 twice and wishes to be taken to Rapid Capabilities Office at Farnborough and the defence intelligence unit at Wyton, according to the Sydney Morning Herald.

Cummings has reportedly had his clearance level observed to ensure he is permitted to visit the key national security sites and can engage in conversations with military personnel present.

The revelation comes as Downing Street begins an integrated review of defence and foreign policy - initially delayed by coronavirus crisis, it will look to examine the armed and security forces strategic aims over a 5-year period.

Conservative backbencher Mark Francois issued a warning to the MoD about Cummings intentions, following a complaint about the ministry's procurement process to General Sir Nick Carter.

"Can we just make a plea to you. You are the professional head of the armed forces. Please nip back to the department and ask them to sort their bloody selves out, because if not, Cummings is going to come down there and sort you out his own way, and you won’t like it", he said.

Labour’s shadow defence secretary, John Healey, raised concerns that the MoD would be “a by-stander” in what is intended to be “the biggest defence review since the Cold War”.

“Plans for Britain's future defence and security should not be in the hands of a political adviser,” he said.

The report has not been denied or disputed by Downing Street or the MoD, who have so far not made any comment.