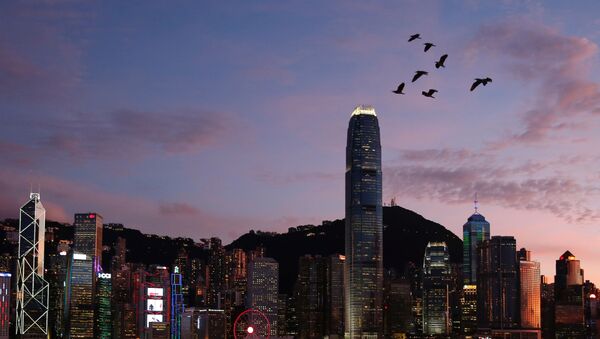 Oleg Burunov
All materialsWrite to the author
On Friday, Canada’s Prime Minister Justin Trudeau voiced serious concern over China signing the new national security law for Hong Kong, and said that Ottawa would consider measures to "ensure the safety of its citizens".

The Chinese Embassy in Ottawa has accused Canada of meddling in China’s domestic affairs after Ottawa announced the suspension of its extradition treaty with Hong Kong to protest a new national security law imposed there by Beijing.

In a statement on Saturday, the embassy’s spokesperson lambasted Canada's "unwarranted comments" on the law, insisting that its leaders had "grossly interfered in China's internal affairs".

"Some Western countries including Canada have been meddling in Hong Kong affairs under the pretext of human rights, which seriously violates international law and basic norms of international relations", the spokesperson pointed out.

They praised the new law as something that would "ensure social order […] and benefit Hong Kong citizens and international investors".

The statement followed Canadian Foreign Minister Francois-Philippe Champagne's announcement on Friday that Ottawa would suspend the Canada-Hong Kong extradition treaty "immediately", in protest to the implementation of the new law.

"This process demonstrated disregard for Hong Kong's Basic Law and the high degree of autonomy promised for Hong Kong under the ‘one country, two systems’ framework. Hong Kong's role as a global hub was built on that foundation. Without it, Canada is forced to reassess existing arrangements", Champagne underscored.

Canada Needs to Rectify Its 'Mistake' And Release Huawei CFO - China's Foreign Ministry
He was echoed by Canadian Prime Minister Justin Trudeau who said on Friday that Ottawa was "extremely concerned" about the situation in Hong Kong under the new law, and that it would examine measures to ensure the safety of its citizens living there.

Trudeau also stressed that Canada is "a firm believer" in the "one country, two systems" framework, a concept that was adopted after the UK returned Hong Kong to China in 1997. The model stipulated guaranteeing Hong Kong residents with rights different from elsewhere in China until 2047.

Beijing-Ottawa tensions have been in place since the December 2018 detention in Canada of Huawei executive Meng Wanzhou, on an arrest warrant from Washington, who blames her for violating US anti-Iranian sanctions.

Trudeau's remarks came after the new national security law for Hong Kong was passed by the Chinese Standing Committee of the National People’s Congress on Tuesday and signed by President Xi Jinping later that day.

The document, in particular, envisages imposing jail terms and hefty fines for any secessionist activity and attempts to undermine the state's authority.

The law also allows the Chinese government to establish a national security agency in Hong Kong, which will make policy recommendations and analyse the security situation in the special autonomous region.

The Hong Kong security law's adoption was welcomed by 52 countries in a joint statement presented by the Cuban delegation at the 44th session of the United Nations Human Rights Council earlier on Tuesday.