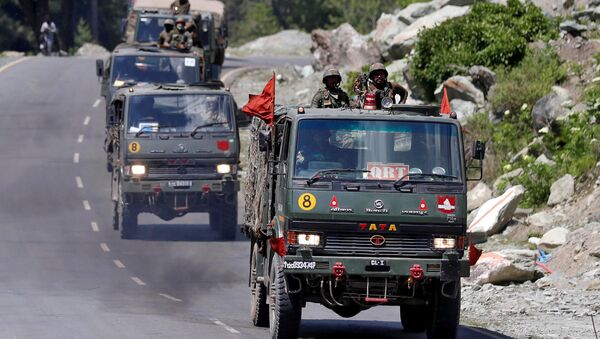 New Delhi (Sputnik): Indian Prime Minister Narendra Modi paid a surprise visit to the country's Ladakh region, where a border clash along the Line of Actual Control took place between the Indian Army and Chinese troops. Modi also met soldiers who were injured in the skirmish in a hospital in Leh.

The Indian Defence Ministry on Friday cleared the air on "unsubstantiated accusations" and "unfortunate aspersions" cast over the treatment being provided to the armed forces personnel injured in Indo-China border clash and clarified that the facility where the soldiers were being treated is a part of the crisis expansion capacity, which is a part of the General Hospital.

"The COVID-19 protocol had necessitated some wards of the General Hospital to be converted into isolation facilities. Hence, this hall which otherwise was normally used as a Training Audio Video Hall was converted into a ward ever since the hospital was also designated as COVID treatment hospital", the statement released by the ministry said.

The Indian government came under fire on Friday when Prime Minister Narendra Modi visited a military hospital in Leh and held a one-one interation with the personnel injured in the 15 June Ladakh border face-off.

​After pictures of the interaction went viral on social media, the opposition raised questions on the treatment provided to the wounded soldiers and the facility that they were being kept in.

"What kind of a hospital is this - no drip, photographer instead of doctor, no medicine with bed, no water bottle?" opposition congress members tweeted.

​During his surprise visit to Ladakh, Modi told the injured personnel that they fought bravely and gave a befitting reply to the Chinese Army in the clash, which took place in the disputed Galwan Valley in the eastern Ladakh region.

In his speech at Nimu, where the prime minister interacted with army personnel before paying a visit to the hospital, Modi said that "Galwan is India’s crown and it is the mark of respect for 1.3 billion Indians".

Responding to Modi's Ladakh visit, China's Foreign Ministry said that both countries should try to defuse the tensions and refrain from acting in a manner that may escalate the situation, especially when talks to resolve the dispute are ongoing.

The direct face-off between India and China broke out after both countries accused each other of violating the Line of Actual Control in Ladakh. While India lost 20 soldiers, the casualties on the Chinese side are yet to be revealed.