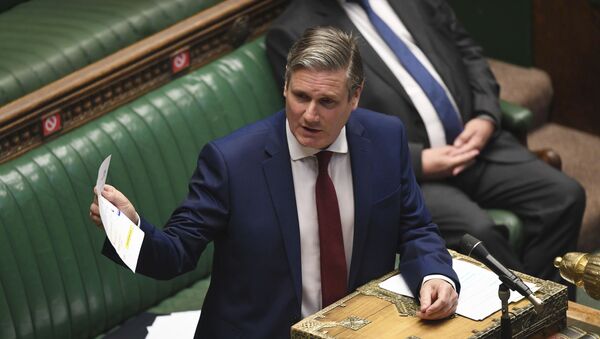 Keir Starmer has warned that an inquiry will take place "in due course", arguing that now is the time to focus on the measures that will ease the fallout from the coronavirus healthcare crunch.

UK Labour Party head Keir Starmer has taken a dig at UK Prime Minister Boris Johnson's handling of the coronavirus crisis charging that while he is "good on rhetoric", the same does not relate to his "governing".

The opposition leader said an inquiry is imminent over the UK authorities' countermeasures against the still continuing pandemic.

"I think an inquiry is inevitable", Starmer told Sky, adding it will happen "in due course" because at the moment he believes the country should "focus on the job in hand", he said when asked why he was not calling for an immediate inquiry.

Asked about his views on the government's anti-coronavirus policies, he said: "Too slow, asleep at the wheel, and they really need to up their game".

The prime minister, who fought for his life in an ICU after contracting the virus in late March, earlier said the government owed it to the victims to look at exactly "what went wrong and when", but felt that this is not the right moment for an inquiry into the handling of the pandemic.

Last week, UK Prime Minister Boris Johnson unveiled what has already been referred to as a Franklin Roosevelt-style "New Deal", promising to give the British economy a boost after it emerges from the coronavirus-induced crisis.

"It's absolutely vital for us to set out the way ahead, so that everyone can think and plan for the future, short, medium, and long term. [...] We must work fast because we've already seen the vertiginous drop in GDP and we know that people are worried now about their jobs and their businesses", Johnson said while speaking at a college in the central English town of Dudley.

The prime minister went on to call for Britain to seize the moment to fix decades-old problems and narrow the productivity gap with its competitors.

Johnson's newly unveiled grand £5 billion package includes recovery aid for schools, hospitals, roads, and other major facilities, with the prime minister pledging to build more houses as part of what he called an "infrastructure revolution" to get Britain's economy rolling anew after the pandemic.

During the speech, Johnson admitted, though, that "mistakes" had been made in the UK's response to the coronavirus, acknowledging that some parts of the government were "so sluggish" when urgent action was needed.

Earlier, in April, the first calls to launch an investigation into the authorities' handling of the crisis could be heard, with Britain's Liberal Democratic Party also urging to kickstart a probe into the way the Cabinet has been approaching the healthcare and economic woes and claiming that Boris Johnson's government had failed to provide medical equipment for the NHS and was slow in its overall response.

The UK has been gradually easing the lockdown in phases since early June, with the next step lated for after 4 July.

In an interview with Sky News’ Sophie Ridge in late June, Health Secretary Hancock said that while he could not express any certainty, based on the now registered trajectory of lower infection rates, "we are on plan" to further ease the lockdown, he said.

In another move to relax the lockdown, it is widely chewed over that a whole range of hospitality venues and services, such as hotels, pubs, restaurants, and hairdressers will reopen in the coming days.

According to government statistics, the British economy contracted by an unprecedented 10.4 percent in the three months up to the end of April, with the number including the nation's largest-ever monthly dip in GDP in April.

Almost nine million workers or more than a quarter of the total workforce across the country, have been furloughed, which has cost the government over $24.2 billion to date.