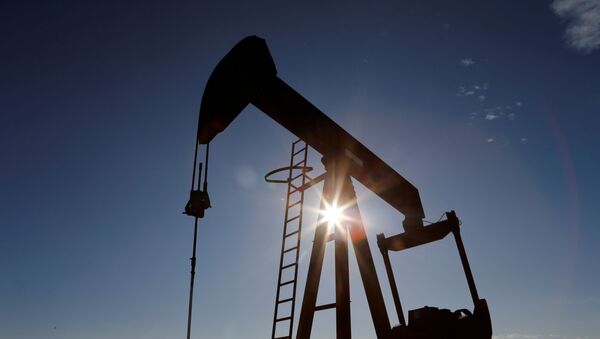 © REUTERS / Angus Mordant
Subscribe
International
India
Africa
WASHINGTON (Sputnik) - US oil production is no longer falling, with output steadying at 11 million barrels per day (mbd) for a second straight week after sharp reductions over the past three months from demand destruction caused by the novel coronavirus pandemic, data from the Energy Information Administration (EIA) revealed.

The EIA estimated a record high crude production of 13.1 mbd in mid-March, reinforcing United States' position as the world’s largest oil producer. Since a plunge in demand for crude triggered by the pandemic pushed output down to 10.5 mbd by the week ending on June 12.

That output level remained in the latest week to June 26, EIA data showed, as US crude prices traded at around $40 per barrel, or nearly four times higher than the late April lows.

Oil Prices Plummet Amid Fears Over US Crude Oversupply
The rebound in crude prices was helped by a sharp cut in the number of oil rigs deployed in the United States’ shale drilling patches and well shut-ins. Globally, production cuts led by the Saudi-led and Russian-assisted OPEC helped as well.

Industry analysts have, however, said they expect more uncertainty in crude production and prices going forth due to an increase in novel coronavirus infections in the United States in recent weeks.