Pompeo Says Important to Have 'More Frequent Engagements' With Russia 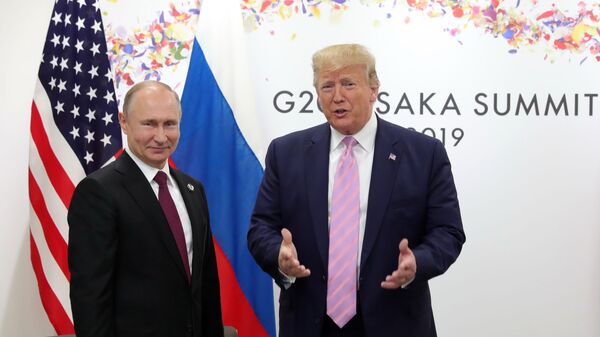 WASHINGTON (Sputnik) - US Secretary of State Mike Pompeo said in a press briefing on Wednesday that President Donald Trump will decide whether to invite Russia to the G7 summit, but it is important and appropriate to continue having more frequent contacts with that country.

"With respect to Russia and the G7, when they were in this, they were causing problems. Out of it, and they still continue to present risk to us," Pompeo said. "We need to talk to the Russians. And so, President gets to decide if he wants them to come to summit... it’s his decision, I’ll certainly leave that to him. But I do believe it is absolutely important that we have more frequent engagements with the Russians."

Pompeo added that he thinks it is very important as well as appropriate for the United States to continue to have a dialogue with Russia in order to convince Moscow "to change some of the activities that are inconsistent with what it is the United States needs to do to preserve security and freedom for its own people."

Pompeo’s comment comes after the New York Times published an article on Friday citing unnamed intelligence officials who said President Donald Trump had received an intelligence report claiming Russia could have paid bounties to Taliban-linked militants to assassinate the US and coalition troops in Afghanistan.

Russian officials have denied the allegations in the article as false and characterized the effort behind the article as being part of the internal political infighting in the United States.

The next G7 meeting in Washington was scheduled for June 10 but was be postponed until September due to the novel coronavirus pandemic. Trump has expressed his wish to hold the summit in an extended format to include the leaders of Russia, Australia, South Korea and India.

Japan Voices Objections to US Over Inviting South Korea to G7 Summit - Reports
On Friday, Russian Deputy Foreign Minister Sergei Ryabkov said Moscow is considering Trump’s proposal to invite Russia to the G7 summit. Ryabkov noted that in general, Russia prioritized other formats, including the G20 and BRICS, as being the most democratic and inclusive formats.

Russia joined the Group of Seven in 1998, making it G8 until 2014 when other member countries gathered in Brussels instead of Sochi due to disagreements with Moscow over the Ukrainian crisis and reunification of Crimea.