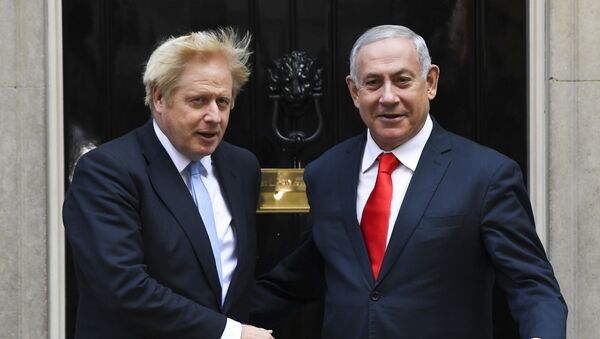 The government of Benjamin Netanyahu is expected to go ahead with taking over Jewish settlements in the West Bank, as well as the Jordan Valley, as early as Wednesday.

UK Prime Minister Boris Johnson has made a last-minute attempt to talk Israel out of taking over parts of the West Bank.

Writing in an op-ed in Israeli newspaper Yedioth Ahronoth, Johnson said he was sad to learn about the “proposals to annex Palestinian territory.”

Johnson, whose great-grandfather was Jewish, reflected on his time at an Israeli kibbutz as a teenager and called himself a “life-long friend, admirer and supporter of Israel.”

However, he felt fear that Israel’s West Bank plans will “fail in their objective of securing Israel’s borders and will be contrary to Israel’s own long-term interests.”

Johnson warned that “annexation would put in jeopardy the progress that Israel has made in improving relationships with the Arab and Muslim world” and that it would violate international law.

“I profoundly hope that annexation does not go ahead. If it does, the UK will not recognise any changes to the 1967 lines, except those agreed between both parties,” he wrote.

Israeli Prime Minister Benjamin Netanyahu has long promised to extend Israeli sovereignty to parts of the West Bank; the Trump administration’s support and the coalition agreement he struck with Benny Gantz have given a strong boost to those plans.

Netanyahu has set 1 July as the date from which he would start the process to take over roughly 30 percent of the West Bank. However, Benny Gantz, the alternate prime minister who supports the idea, cast uncertainty on the timeframe when he called on Monday for a delay to deal with the coronavirus pandemic first.

Johnson became the latest foreign leader to oppose Netanyahu’s plans, after the United Nations, Russia, China and the European Union have all voiced concerns that it will lead to a spike in violence in the region and kill the peace process. Palestinians have condemned the idea, with Gaza rules Hamas calling it an effective declaration of war.

Palestinians leaders have called for protests on Wednesday in the Jordan Valley, the Gaza Strip and in Ramallah, the West Bank seat of the Palestinian Authority.