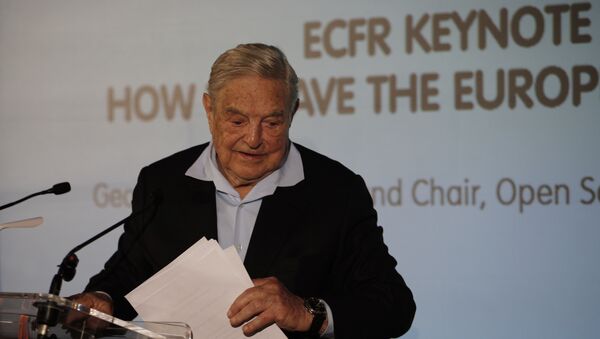 © AP Photo / Francois Mori
Subscribe
The Anti-Defamation League, a US-based Jewish NGO, has recently expressed concerns about what it says is growing anti-Soros sentiment online, with some of it said to be tinged with anti-Semitic overtones.

Journalist Emily Tamkin, author of a new book defending financier George Soros against his many critics, blames anti-Semitic conspiracy theories, some of them allegedly spread by other Jews, for much of the criticism leveled against the liberal philanthropist.

Commenting on the growing anger against Soros in the US over his Open Society Foundations’ support for Black Lives Matter, Tamkin argued that this criticism was part of a broader anti-Semitic conspiracy theory. “What does blaming Soros do? Does it hurt Soros and Jewish people? I would say yes, but it’s also meant to strip the agency and legitimacy of protests that are about Black Americans. The anti-Semitism is a means to this other discriminatory end,” she suggested.

According to Tamkin, conspiracy theories against Soros have “been around for decades,” with anti-Soros sentiments spreading in part thanks in part to people like the late Arthur Finkelstein, a political consultant who once advised Hungarian Prime Minister Viktor Orban, an avowed Soros critic, and who would later go on to do consulting work for the Trump Organisation.

Regarding Finkelstein, who was himself Jewish, Tamkin suggested that his anti-Soros sentiment “speaks to two things. The first is that there are some people who point to this part of the story and say ‘well it just goes to show that it’s not really an anti-Semitic conspiracy theory. It’s just an opportunistic conspiracy theory’. And to that I would say if you are willing to use anti-Semitism because of opportunity, then you are comfortable with anti-Semitism, which I would invite you to think perhaps means that you are an anti-Semite.”

“And the second thing is that Finkelstein had first worked with [Benjamin] Netanyahu. There’s a really important element to the story, which is that Israel also deals in these anti-Soros conspiracy theories. Soros has a very different understanding of what it means to be Jewish than Israel does. His Jewishness is not wrapped up in the State of Israel. For him, it’s more about universal human rights and universal values, and it’s not about support of the Zionist project,” she added.

Source of Anger in Eastern Europe

Commenting on the strong anti-Soros sentiment in Eastern Europe, where the hedge fund manager, who was born in Hungary, got his start in ‘political philanthropy’ over thirty years ago, Tamkin suggested that this anger was tied to socio-economics.

“You have people –specifically in Central and Eastern Europe – realising that the European Union and the promised democratic liberal project was not going to give them everything that they thought it was going to give them. For that reason, people are disaffected, they look for leaders who will play on that disaffection, and those leaders, in turn, need to do something because they can’t actually make it all better,” she suggested.

Soros got his start in funding political movements in the 1980s, offering material support for anti-communist organisations spreading in Eastern Europe at the close of the decade in countries like Hungary and Poland, and providing funding for political, economic and institutional reforms across Eastern Europe and the former Soviet Union starting in the early 1990s.

His activities have since spread to over 60 countries worldwide, including the United States, and he’s become seen as a public figurehead of the post-Cold War liberal, globalised world order, not just in the developing countries, but the West as well.

Where Did the Money Come From?

In the financial world, Soros is perhaps best-known for his currency speculation against the British pound in 1992, which earned him his first billion dollars in profit, but caused the British economy billions of pounds in losses. In 2002, he was convicted of insider trading by a French court, and fined 2.2 million euros, with the conviction upheld by the European Court of Human Rights in 2011. The rest of the money he has spent on his political activities is thought to have come from his work as a hedge fund manager.

In recent years, a number of countries have moved to ban Soros-related activities on their soil. Russia added the OSF to a list of organisations whose activities were deemed to pose a threat to national security in 2015. Authorities in Hungary and Poland, Israel, Montenegro and Macedonia have similarly accused the billionaire of meddling in their internal affairs, while some Soros-backed ‘pro-democracy’ initiatives have been banned in other countries, including Kazakhstan and Turkmenistan.

The range of Soros’ critics runs from the far-left to the far-right to everything in between. However, in Western media, the criticism he receives from the right gets the most attention, with some conservative commentators accused of spreading hateful or even anti-Semitic conspiracy theories about Soros alleged desire to “destroy” the United States from within, and unsubstantiated claims that he is a former Nazi collaborator, that he owns Antifa, etc.

Last week, amid the ongoing Black Lives Matter protests which followed in the wake of the police killing of George Floyd, The Anti-Defamation League reported that the daily number of negative tweets about Soros has jumped from 20,000 on May 26 to over 500,000 by May 30, with over 68,700 negative mentions also reported on Facebook, up from the previous record of 38,200 in October 2018, according to the Institute for Strategic Dialogue think tank. Soros’ foundations are estimated to have funnelled up to $33 million in cash to groups partnering with the Black Lives Matter movement, but there is no evidence to date that this money was provided specifically for the organisation of protests.

000000
Popular comments
"Jewish Power-The power to silence criticism of Jewish Power" Dixit Glad Atzmon philosopher and Jazz Saxophonist "The Shameful Misuse Of Jewish Power"is a book by Mike Rothbaum. "There is a strain in Jewish thought that says there is a special Godly something or other that is passed down in a certain genetic line which confers a special quality on people and Jewishness is a special quality. I call that metaphysical racism." Rabbi Mark Solomon "To the Christian and to the entire non-Jewish world, Jews say this: 'You will apologise for Jewish suffering again and again and again. And, when you have done apologising, you will then apologise some more. When you have apologised sufficiently we will forgive you ... provided that you let us do what we want in Palestine.' Marc Ellis.