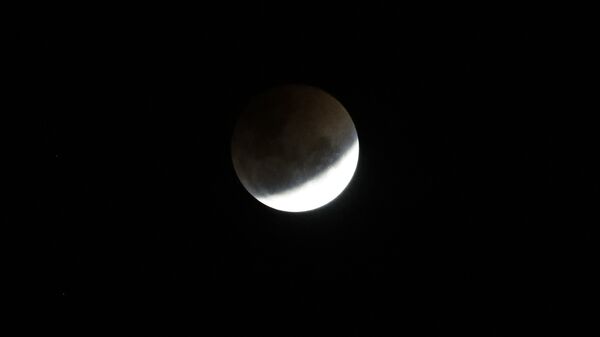 © AP Photo / Themba Hadebe
Subscribe
Prior to the 20th century, astronomers believed that the dark spots on the visible side of the moon were dried up seas and oceans. The scientists assumed that the far side of Earth’s natural satellite was covered with the same traces, but in the end, both assumptions turned out to be wrong.

Scientists from the Earth‐Life Science Institute at the Tokyo Institute of Technology, the University of Florida, the Carnegie Institution for Science, Towson University, NASA Johnson Space Centre, and the University of New Mexico have presented new clues about the way the Moon gained its near‐ and far‐side asymmetry, the website Eurekalert reports.

According to the researchers, the heterogeneity of the lunar surface is explained by the uneven distribution of substances of the KREEP group.

KREEP is "short for rock enriched in potassium (chemical symbol K), rare‐earth elements (REE, which include cerium, dysprosium, erbium, europium, and other elements which are rare on Earth) and phosphorus (chemical symbol P) - which was associated with the maria", the scientists explained.

These substances were found in lunar rocks brought to Earth by American astronauts. The researchers analysed the results of observations, laboratory experiments, and computer simulations and concluded that the heat from the radioactive decay of these elements melted solid rock, creating craters on the lunar surface.

Moreover, the elements were distributed unevenly on the surface of the satellite. On the visible side, according to scientists, the rocks were enriched with radioactive uranium, potassium, and thorium, which is why more craters formed there.

"Because of the relative lack of erosion processes, the Moon's surface records geological events from the Solar System's early history. In particular, regions on the Moon's near side have concentrations of radioactive elements like U and Th unlike anywhere else on the Moon. Understanding the origin of these local U and Th enrichments can help explain the early stages of the Moon's formation and, as a consequence, conditions on the early Earth", co‐author Matthieu Laneuville of the Earth‐Life Science Institute (ELSI) stated.

According to Laneuville, the evidence for these kinds of "non‐symmetric, self‐amplifying processes might be found in other moons in the Solar System" and may be "ubiquitous on rocky bodies throughout the Universe".