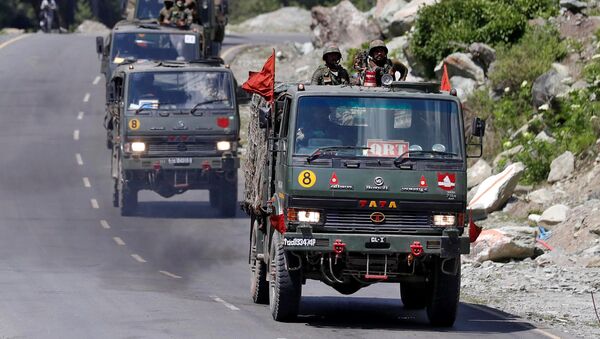 © REUTERS / DANISH ISMAIL
Subscribe
New Delhi (Sputnik): Indian PM Narendra Modi triggered a wave of discontent with his statement that ‘no one intruded into our territory’ following the India-China border skirmish on 15 June, when 20 Indian soldiers were killed. The remark rattled several retired army officer who called it disrespectful to the memory of fallen servicemen.

Former Indian Prime Minister Manmohan Singh has criticised the handling of the India-China border issue by the Narendra Modi government, stating that the latter should be mindful of the implications of his statements.

“We cannot and will not be cowed down by threats and intimidation nor permit the compromising of our territorial integrity. The Prime Minister cannot allow them to use his words as a vindication of their position and must ensure that all organs of the Government work together to tackle this crisis and prevent it from escalating further,” stated Singh, an economist by training who served 10 years as Prime Minister of the country, starting in 2004.

Following the deadly clashes between Indian and Chinese troops in Ladakh last week, Modi called an all-party meeting on 19 June to discuss the border issue, where he stated that, "No one has intruded and nor is anyone intruding, nor has any post been captured by someone."

Referring to the statements coming from the Indian government, Singh said that disinformation is no substitute for diplomacy or decisive leadership and the country owes a great debt to the soldiers who lost their lives in Galwan Valley and their loved ones.

“We call upon the Prime Minister and the Government to rise to the occasion, to ensure justice for Col. B. Santosh Babu and our jawans who have made the ultimate sacrifice and resolutely defended our territorial integrity,” he said, calling the situation a “historic crossroads” as the government’s decisions and actions will have “serious bearings on how the future generations perceive us”.

To do any less "would be a historic betrayal of the people's faith”, he said in his first response to the India-China clash.

A day after the statement by Modi, the Prime Minister's Office issued a clarifying statement and said that there was “no Chinese presence on our side of the LAC” as the Indian Army has thwarted an “attempted transgression” in the Galwan Valley.

Meanwhile, most of the Chinese media outlets welcomed Modi’s comments on the border issue, saying they would pave the way for de-escalation. The Global Times said that Modi had “also appeared to play down the clash”.

“Modi’s remarks will be very helpful to ease the tensions, because as the Prime Minister of India, he has removed the moral basis for hardliners to further accuse China,” Lin Minwang, a professor at Fudan University’s Center for South Asian Studies in Shanghai, told the Global Times. “When India is in a conflict with Pakistan or other neighbours, nationalism might drive New Delhi to take actual operations, but when it comes to China, it is a different story.”

India and China have been engaged in a bitter border conflict in the northern union territory of Ladakh for the last two months, which escalated into a violent clash in Galwan Valley on 15 June where at least 20 Indian soldiers were killed. The two sides accused each other of attempting to change the status quo in the region.

000000
Popular comments
India lives to lie and lies to live It was the liars who caused the soldiers to die; lie more will not honor them but will cause more to die.
Sir Percy
22 June 2020, 13:59 GMT3
000000
Newsfeed
0
New firstOld first
loader
LIVE
Заголовок открываемого материала
Access to the chat has been blocked for violating the rules . You will be able to participate again through:∞. If you do not agree with the blocking, please use the feedback form
The discussion is closed. You can participate in the discussion within 24 hours after the publication of the article.
To participate in the discussion
log in or register
loader
Chats
Заголовок открываемого материала
Worldwide
InternationalEnglishEnglishMundoEspañolSpanish
Europe
DeutschlandDeutschGermanFranceFrançaisFrenchΕλλάδαΕλληνικάGreekItaliaItalianoItalianČeská republikaČeštinaCzechPolskaPolskiPolishСрбиjаСрпскиSerbianLatvijaLatviešuLatvianLietuvaLietuviųLithuanianMoldovaMoldoveneascăMoldavianБеларусьБеларускiBelarusian
Transcaucasia
ԱրմենիաՀայերենArmenianАҧсныАҧсышәалаAbkhazХуссар ИрыстонИронауОssetianსაქართველოქართულიGeorgianAzərbaycanАzərbaycancaAzerbaijani
Middle East
Sputnik عربيArabicArabicTürkiyeTürkçeTurkishSputnik ایرانPersianPersianSputnik افغانستانDariDari
Central Asia
ҚазақстанҚазақ тіліKazakhКыргызстанКыргызчаKyrgyzOʻzbekistonЎзбекчаUzbekТоҷикистонТоҷикӣTajik
East & Southeast Asia
Việt NamTiếng ViệtVietnamese日本日本語Japanese中国中文Chinese
South America
BrasilPortuguêsPortuguese
NewsfeedBreaking
08:05 GMT'Ronaldo's Only Ambition is to Retire With More Ballon d'Or Trophies Than Messi', Claims Award Chief
07:24 GMTDanger Zone: Tom Cruise Hangs From Wing of Flipping Plane for New Mission: Impossible Movie - Photos
06:56 GMTItalian Police Raid Juventus Offices as Part of Probe Into Player Transfers
06:37 GMTBJP MP Gautam Gambhir Receives Third Death Threat After Similar Messages From 'Daesh Kashmir'
06:06 GMTQueen Elizabeth II Picks Up Her 'MI6 Anti-Hacker Encrypted' Phone 'for Two People Only'
06:01 GMTFukushima Plant's Operator Starts Surveys to Prepare for Wastewater Dump, Reports Say
05:52 GMT'All Mouth and No Trousers': Boris Johnson 'Fed Up' With Priti Patel Over Migrant Channel Crossings
05:35 GMTFood Prices in Israel Much Higher Than in EU, Here's Why
04:46 GMTCOVID-19 Live Updates: Israel Closes Borders for Two Weeks Over Omicron Strain Fears
03:42 GMTHis Life, His Rules: Biden Spotted With Mask Down on His Chin While Inside Shop
03:28 GMTSouth Africa Laments Travel Restrictions, Calling Them ‘Punishment’ For ‘Excellent Science’
02:57 GMTGhislaine Maxwell Ready to Take Stand at Trial to 'Save Her Own Life' - Report
01:58 GMTMike Tyson Reveals Marijuana Makes Him 'Different Person' as He Launches New Cannabis Line
01:52 GMTConcerns About Spread of New Covid Strain Rise as Another Migrant Caravan Crosses Into US - Report
01:28 GMTMass Theft Occurs at Best Buy Store in Minnesota, Police Say
00:26 GMTTrump Keeps Mt. Rushmore Sculpture With His Face on It on Display in His Office
00:01 GMTA Glimpse of Hope: Biden Approval Rating Climbs 2 Points, But Still Scores Low on Economy - Poll
YesterdayAbbott Says Texas Is Ready For Possible Cold Winter Due to ‘Dozen Laws’ Signed
YesterdayBarnier Says France Has to 'Be Ruthless With the British' Amid Migrant Crisis - Report
YesterdayEx-Labour Leader Corbyn Slams 'Irrational' Suspension From Party One Year On