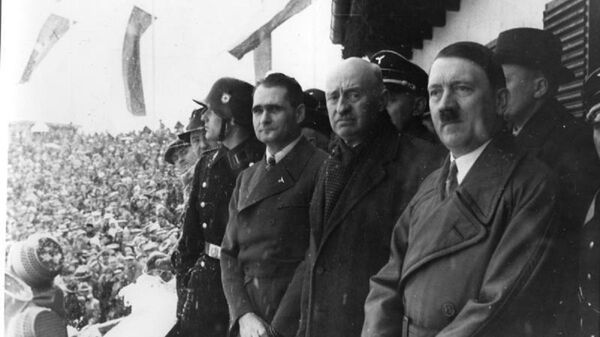 Ilya Tsukanov
All materialsWrite to the author
On May 10 1941, six weeks between the ill-fated Nazi incursion into the Soviet Union, Deputy Fuhrer Rudolf Hess made a solo flight to Scotland, hoping to arrange peace talks with London. For decades, many of the details of his trip, including, crucially, whether Hitler knew about it ahead of time, have remained shrouded in mystery.

Over 79 years since Rudolf Hess’s ill-fated flight across the North Sea, historians continue to debate its significance. Hess, one of Hitler’s closest allies and friends, and for all intents and purposes, the number two man in all of Nazi Germany, made the seemingly mad decision to stock up on supplies, climb into a Messerschmitt, and fly to Scotland, hoping to meet with Douglas Douglas-Hamilton, a nobleman who visited Germany in 1936 as part of a British delegation to the Berlin Olympics, and, reportedly, made contacts with senior German officials, including Hess.

Hess’s mission, it has been alleged, was aimed at convincing Britain’s elite to depose Winston Churchill, an ardent anti-Nazi, and make peace with Germany. Alternatively, Hubert Renfro Knickerbocker, a US journalist and author who had met Hitler, Hess and Churchill, speculated that Hess flew to the UK to inform London of Berlin’s imminent plans to invade the USSR, and to propose an unholy alliance of sorts (Churchill, it was known, was also an fervent anti-Communist).

Rudolf Hess: Mystery of Hitler's Deputy's Death Thickens (DOCUMENTS)
The mystery surrounding Hess’s plans was deepened by his decades’ long isolation and imprisonment, which lasted until 1987, when the 93 year old was found dead in his cell at Spandau Prison in West Berlin, hanging from an electrical extension cable attached to a window latch. The Soviets had reservations that the Nazi official took his own life, as a British-French-American report had claimed, while Hess’s son Wolf-Rudiger claimed his father’s crippling arthritis prevented him from tying so much as his shoelaces, much less a makeshift noose. Several months before his death, Hess’s flight suit and other personal effects were also mysteriously stolen from the prison, with an investigation coming up empty.

What Specifically Did Hess Want to Pass on to London?

While the details of Hess’s mission, imprisonment and death continue to pique historians’ interest, the information about what he planned to offer the British side in exchange for peace are readily available in Russia’s wartime archives, says Dr. Vladimir Makarov, a historian specializing in the special services.

According to the archival files on the testimony of Karlheinz Pinsch, Hess’s long-serving adjutant, to the NKVD, Hess finished work on what he hoped would become the basis for German-British peace talks as far back as March 1941.

Hess’s message, according to Pinsch, included the following details:

“The essence of Hess’s remarks boiled down to the fact that the entire policy of the German government at the time was aimed at preparing for the war against the USSR,” Makarov indicated, recalling Hess’s exact phrasing in this matter: “The forces tied up in the West would be freed to be used against Russia.”

Furthermore, according to the historian, Adolf Hitler, far from being a passive bystander with no knowledge of Hess’s plot, was personally involved in the preparation of these peace terms, and sanctioning the flight to Scotland.

“As we know, the date of the invasion on the USSR by Hitler was repeatedly postponed due to objective circumstances, including the events in Yugoslavia, Albania and Greece. On September 3, 1939,  Britain and France declared war on Nazi Germany, there was the ‘Phony War’ between the UK and Germany, the Luftwaffe bombing of Britain, and waiting for US entry into the war on the Allied side. Having started a war in the East, Hitler would have faced the threat of a war on two fronts. In this regard, the attempt at separate peace negotiations between the Nazis and the British was quite logical. For this reason, Hitler instructed his deputy to prepare the groundwork for an agreement with the British government,” Makarov suggested.

Himmler’s Fake ID Papers That Helped Arrest SS Head in 1945 Come to Light
Accordingly, in his mission, Hess, who had established close contacts with multiple senior British officials in the 1930s, such as the Duke of Bedford, Sir Lloyd George, former Treasury Secretary Lord Simon, diplomat William Strang, and others, sought “if not a military alliance between Germany and the UK against the Soviet Union, then at least England’s neutralization.”

Fortunately for the world, whether sanctioned by Hitler or not, Churchill’s government categorically refused Hess’s request for negotiations, and London would continue the war against Nazi Germany until its victorious conclusion on May 8, 1945.

On June 22, 1941, Nazi Germany, its European allies and volunteer forces from across the conquered territories began Operation Barbarossa, the invasion of the USSR. Churchill immediately reached out to Soviet leader Joseph Stalin, and on July 12, 1941, the two countries signed a formal military alliance. Putting his feelings towards Stalin and the Bolsheviks aside for the duration of the war, Churchill would later quip that “if Hitler invaded hell” he would “make at least a favourable reference to the devil in the House of Commons.”